Create a VPN profile as described in How to Configure the Barracuda VPN Client for macOS.

In the Barracuda VPN Client window, the color of the traffic indicator square shows the status of your VPN connection. As the VPN connection authenticates and establishes itself, the square changes from red to yellow to green. When there are no active VPN connections, the traffic light is red.

When an initiated VPN connection is successfully authenticated, the traffic light turns yellow and Connect changes to connecting. Wait a few moments for the VPN tunnel to completely establish itself.

When the VPN connection successfully establishes itself, the traffic light turns green and Connect changes to Disconnect.

In the Connection Status section, you can view the following information about your VPN connection:

Initiating a VPN Connection from the System Tray Menu

To view the status and configuration of your VPN connection and client, you can also click the following menu options: 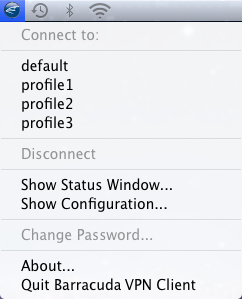 When a VPN connection is successfully established, the status icon turns green.