The outbound and inbound rate of a virtual interface is ignored when the QoS Band policy in the corresponding firewall rule is set to No-Shaping.

Partitioning is never static. For example, if all available traffic has a low priority, it is assigned the whole bandwidth. The Weighted Random Early Drop (WRED) queue management algorithm is used for prioritization. 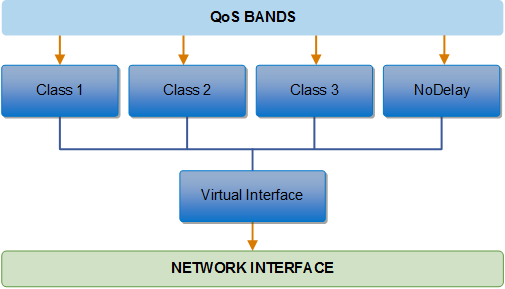 For more information on configuring QoS bands, see How to Create and Apply QoS Bands.

In order to use a shaping connector, you must refer to it in a firewall rule. In the rule configuration, you can select between forward and reverse:

For each traffic type, shaping may be configured differently. For instructions on how to create a QoS Band and apply traffic shaping to a firewall rule, see How to Create and Apply QoS Bands.