Before installing the new firmware version, back up your configuration and read all of the release notes that apply to the versions that are more current than the version that is running on your system.

Do not manually reboot your system at any time while the update is in process, unless otherwise instructed by Barracuda Networks Technical Support. Depending on your current firmware version and other system factors, upgrading can take up to 60 minutes. If the process takes longer, please contact Barracuda Networks Technical Support for further assistance.

In these Release Notes:

If you want to update an existing system:

The following previously released public hotfixes are included with this release: 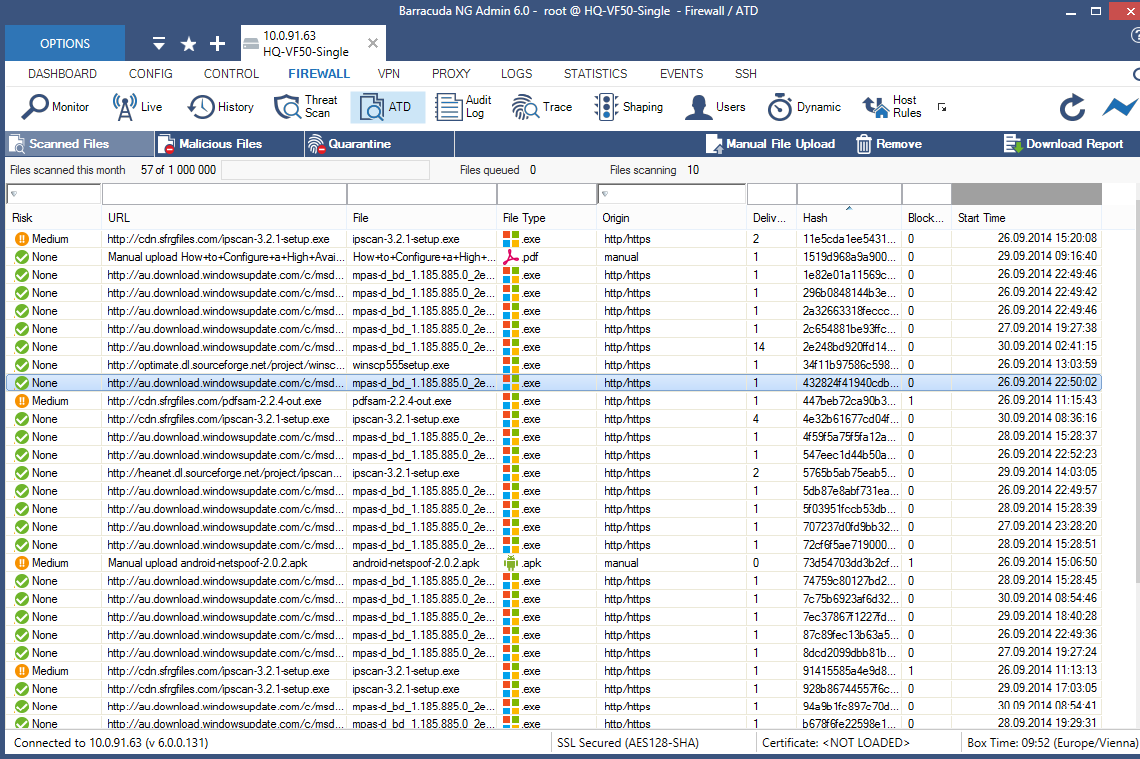 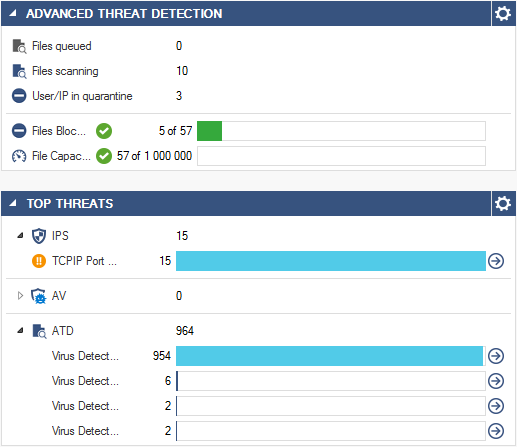 Advanced Threat Detection offers protection against advanced malware, zero-day exploits, and targeted attacks that are not detected by the virus scanner or intrusion prevention system. ATD analyzes files in the Barracuda ATD cloud and assigns a risk score. Local ATD policies then determine how files with a high, medium or low risk score are handled. You can configure email notification of the administrator and/or enable one of the automatic blacklisting policies. To check local files, you also have the option to manually upload a file via NG Admin.

Mobile Portal for End-Users on Mobile Devices for SSL VPN 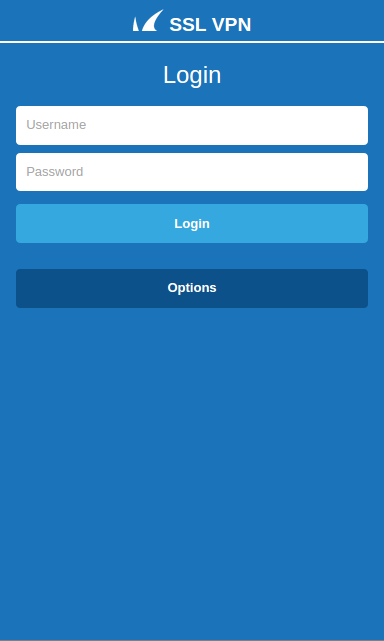 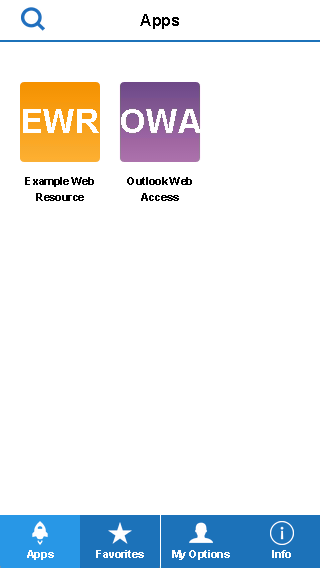 For mobile users accessing the SSL VPN, there is a new mobile portal, which has been designed for ease of use and low support costs. The mobile portal is supported by most commonly used devices, e.g., Apple iOS, Android, Windows Phone and Blackberry. When logging in, you can choose between domain and local authentication. Each web resource uses an auto-generated, contrasting icon for optimal user experience. You can also enable or disable dynamic firewall rules from the mobile portal of the SSL VPN. 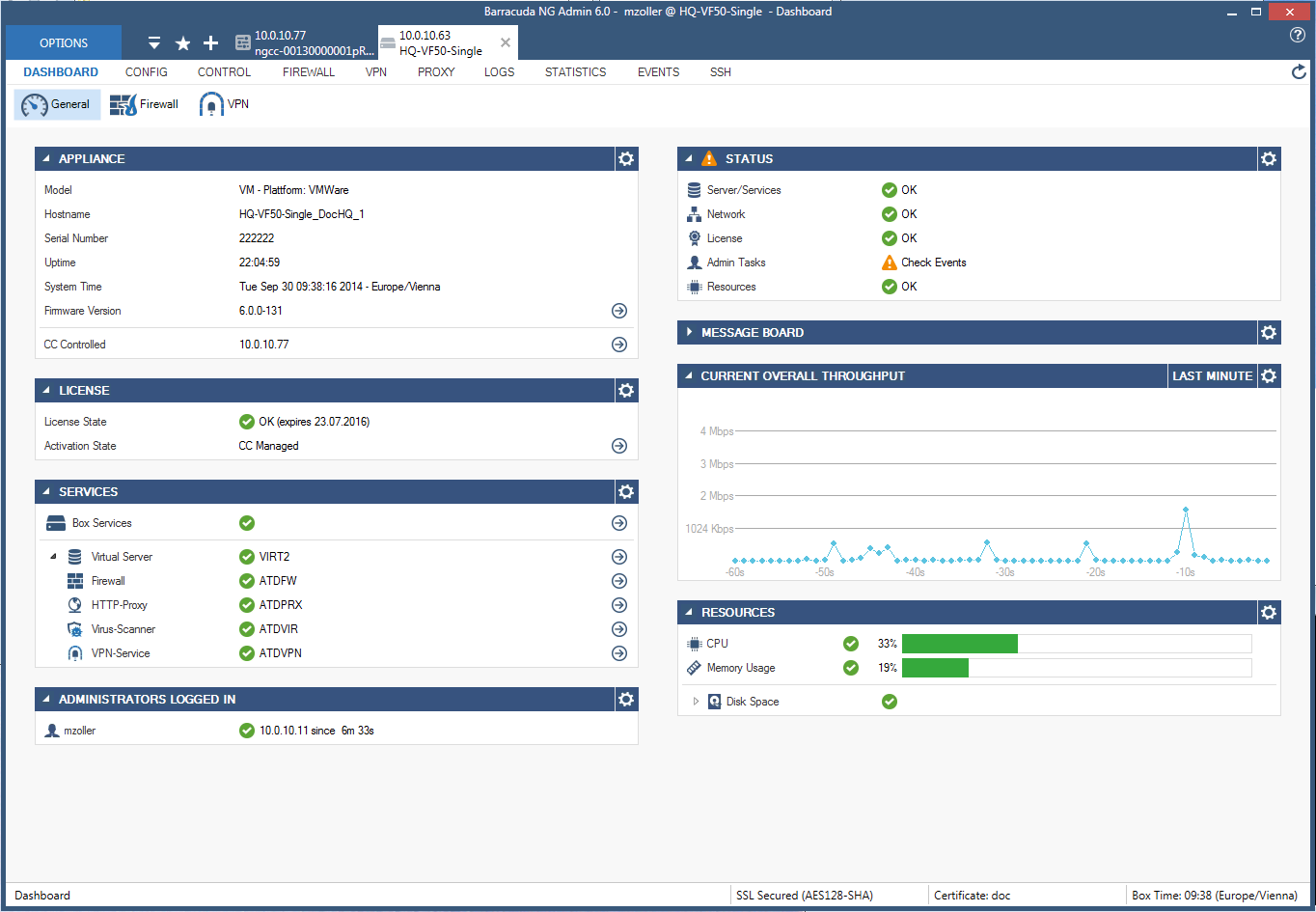 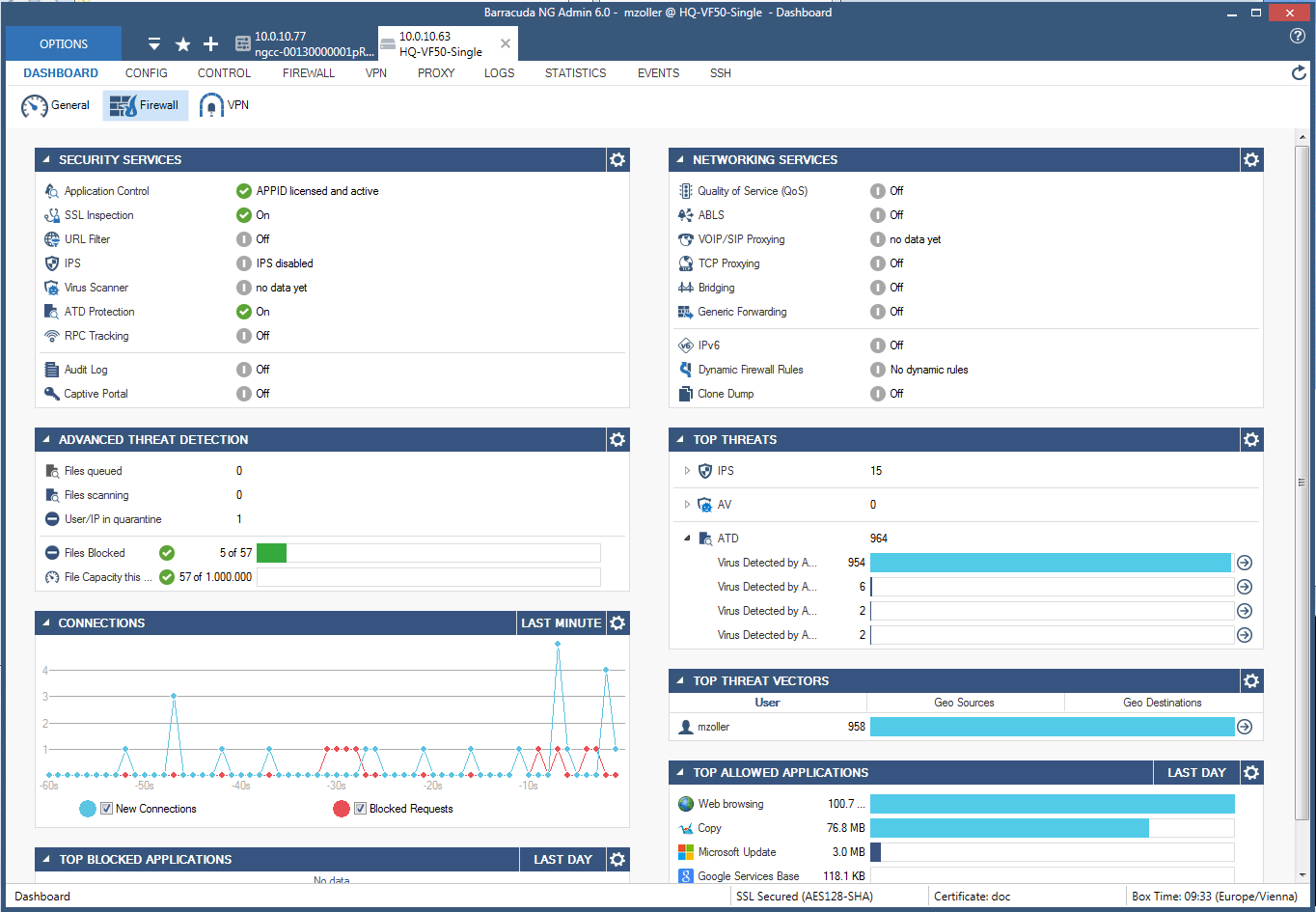 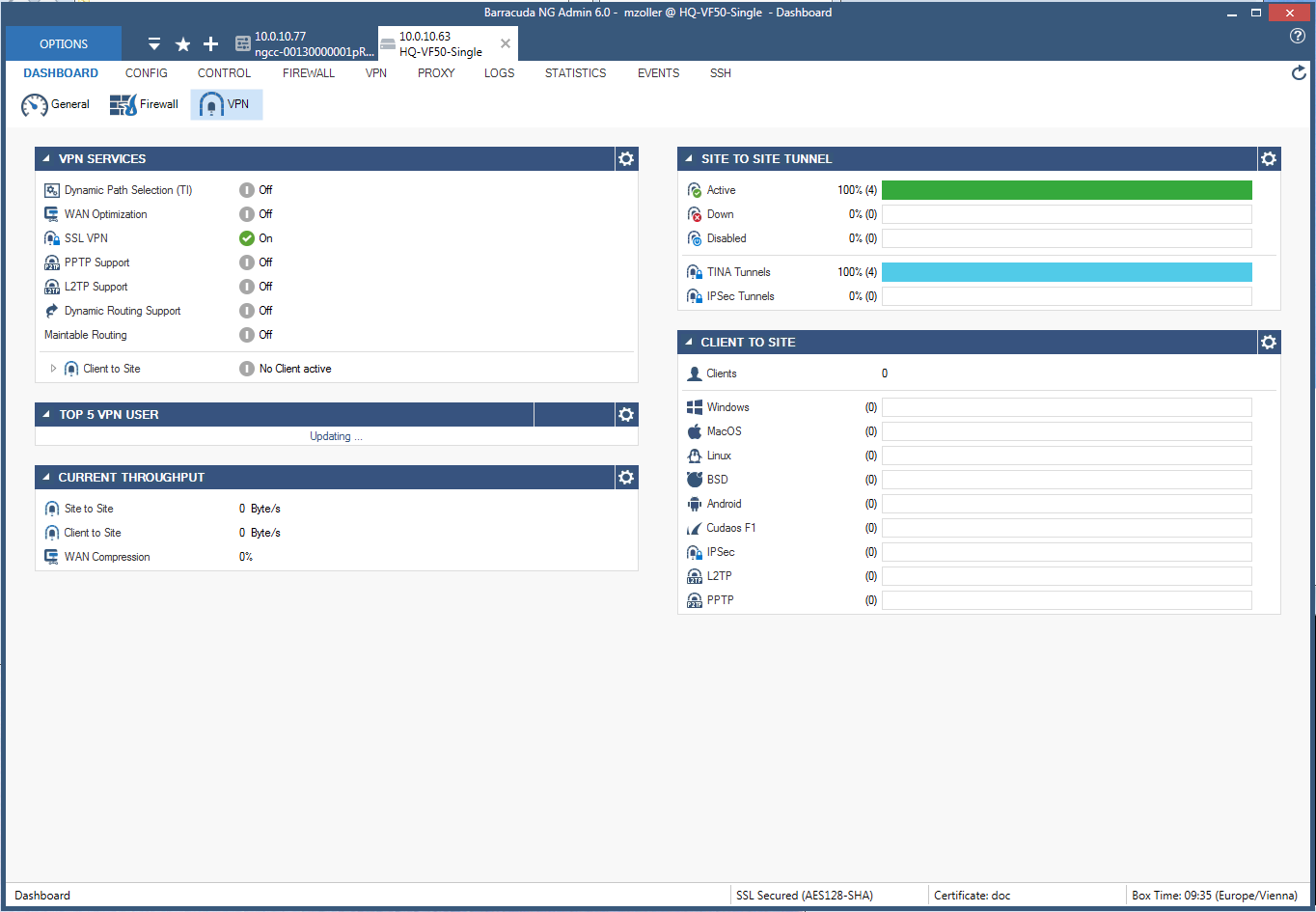 Barracuda NG Admin 6.0 uses a new visual style and a redesigned user interface. When logging in, the new dashboard offers small, configurable, and movable elements arranged in three tabs: General, Firewall, and VPN. Each element contains specific continuously updated information, such as system resources, current firewall or VPN throughput, or number Client-to-Site VPN tunnels. Elements can be dragged and dropped freely in their tab according to your preferences.

For more information, see How to Configure Audit & Reporting with IPFIX.

The Mail Gateway now offers an interface to manage emails in the quarantine. The admin can access all emails with scan information and, if needed, allow delivery to one or more recipients for individual emails. The admin also receives a daily notification email containing a list of emails currently in quarantine.

You now have the option to use compression for all traffic between managed NG Firewalls and your NG Control Center. Default: off.

Information on the network topology in Azure and AWS is gathered and made available via custom external network objects.

The Barracuda NG Firewall F1000 with a data throughput rate of up to 40Gbps is the new flagship model in the NG Firewall line. The F1000 uses up to four field replaceable network modules that can be equipped with a combination of 32x1GbE RJ45 Copper, 16x1GbE SFP Fiber, and 8x10GbE SFP+ Fiber modules.

Reboot and Shutdown for Non-ROOT Users

An Administrative Role has been added to allow non-root users to reboot and shutdown a Barracuda NG Firewall. The user can reboot or shutdown via NG Admin or command line using the new adminshutdown command.

For more information, see How to Configure Administrative Roles.

To reduce the load on LDAP servers, you can now enable caching for  selected LDAP groups objects.

For more information, see How to Configure LDAP Authentication.

For more information, see How to Create PAR or PCA Files on the Command Line and phionar and conftool. 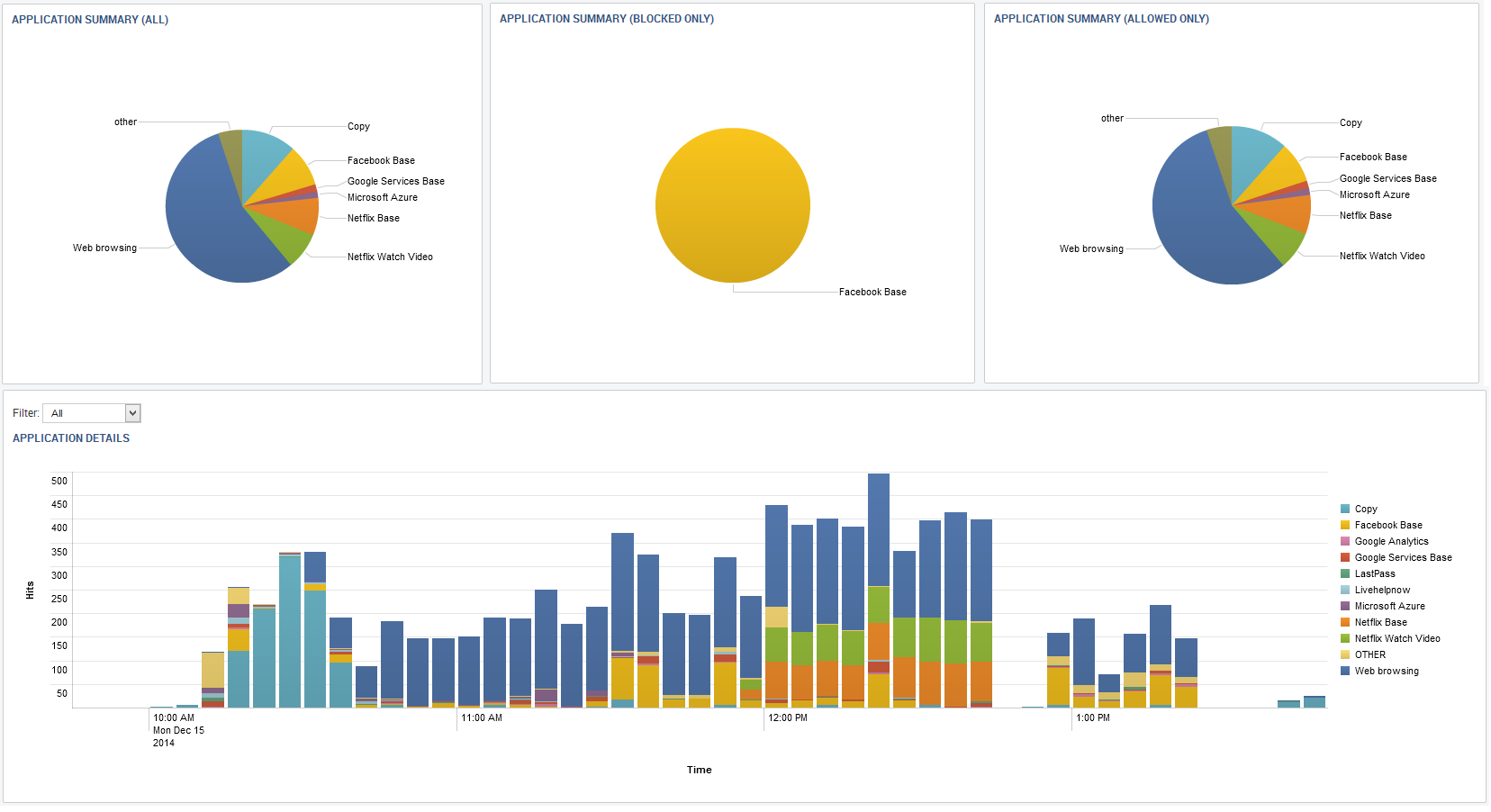 Splunk is a third-party platform for operational intelligence that allows you to monitor websites, applications servers, and networks. The Barracuda NG Firewall app shows information on matched access rules, detected applications, and applied URL filter polices on various fixed and real-time timelines. Data is imported into Splunk via syslog streaming of the Firewall activity log.