In the Remote Execution window, information and configuration elements are divided into the following sections: 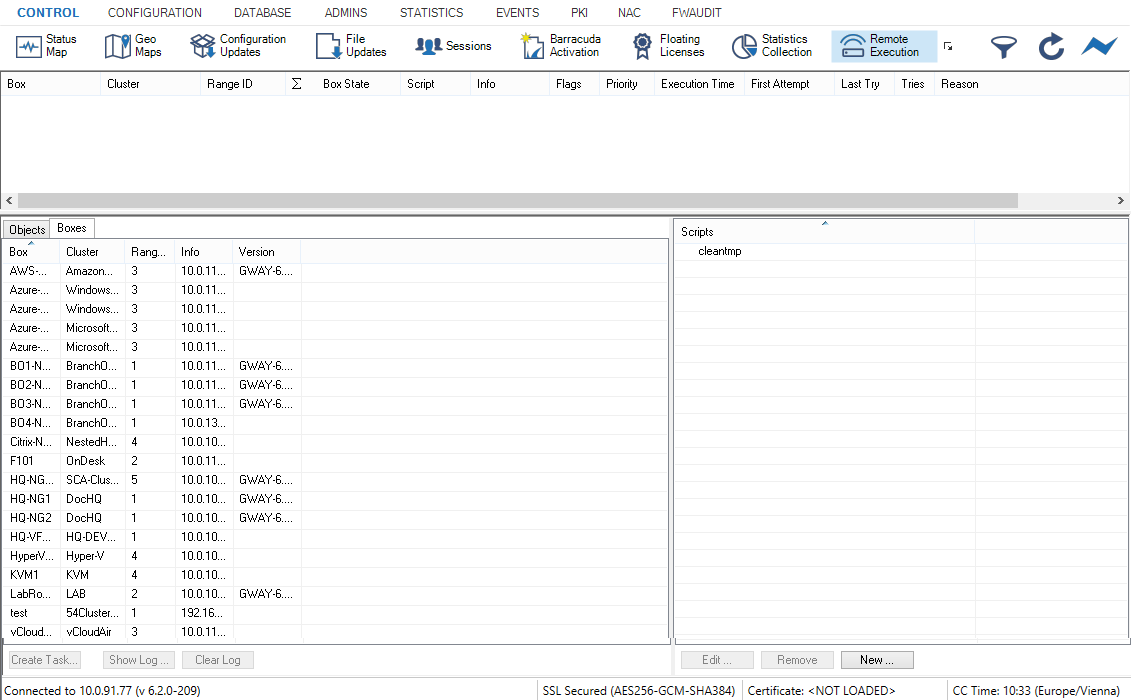 The listing of tasks (if present) in the upper section of the page is divided into the following columns:

In the scripts list section on the right, scripts provided for execution on boxes can be created, modified, and deleted. Use the buttons from the action menu on the bottom of the page to perform the following operations:

A script that can be selected together with a box or a box group object has to exist before a task can be created.

In the section on the left of the page, you can select groups of boxes for task execution. Under the Objects tab, multiple boxes can be combined to form group objects for quick task creation. Barracuda NextGen Control Center objects are saved to the Windows System Registry on the client PC. They can be exchanged between multiple clients by exporting and then importing them again.

To create a new object, proceed as follows:

If options are activated for use depends on the selected view (checkbox Show All Boxes can be selected) and if the object has already been saved.

The Boxes tab displays a listing of all existing boxes on the Barracuda NextGen Control Center. When a box is selected, it is highlighted. Multiple boxes can be selected by simultaneous pressing of the shift/CTRL key and clicking on a box. The following detail information is covered in the box list:

On the bottom of the page, the following action menu applies for both tabs in the box list:

Create Task – This button becomes active when a Box/Object/Script combination is chosen from the scripts and box lists. Task creation opens the Schedule Task window, allowing for detailed specification when and how the task should be executed. The following values can be specified within the Schedule Task configuration window:

The following action menu only applies to the Boxes tab:

The following action menu only applies for the Objects tab:

Execution of the script can be triggered by selecting a particular script and a Barracuda NextGen Firewall F-Series. During execution, all output of the script is directed to a box log file that is held at the Barracuda NextGen Control Center and can be reviewed by the administrator after execution. Consult these files for verbose output or error logging of the script. The following section describes the process of a remote execution task that cleans up the /tmp directory on selected firewalls.

The newly created tasks appear as entries with a green indicator (see following screenprint) and disappear as soon as the task is finished.

If a task fails, the corresponding entry remains in the task list and is shown with a red indicator. Look at the Reason column for an explanation of the failure.

Double-click on the firewalls to view the log files and check if the desired actions have been taken.

To reschedule or delete a task, right-click it and select Reschedule or Delete Task from the context menu.