The Barracuda NextGen Control Center is licensed by installing the base license on both the box layer and the management interface of the Control Center. For managed NextGen F-Series Firewalls, the Control Center manages, assigns, and updates VF and SF pool licenses and, as an option, can also automatically activate licenses.

For more information, see How to Manually Install the Licenses for the Control Center.

Managed F-Series Firewalls can be licensed with single or pool licenses.

Single licenses are bound to the MAC and cpuid of the individual firewall and cannot be transferred. To make deploying a large number of firewalls easier, the Control Center can automatically fill in or complete the Barracuda Activation for newly managed firewalls using single licenses. If you have filled in the Activation Template (Config > CC Parameters) on the Control Center, the web form is automatically filled in. By enabling unattended activation in the Barracuda Activation tab for you license, you will not be prompted when a unit is activated.

Pool licenses can only be purchased in multiples of five and are bound to the base license of the Control Center. This means that they can be assigned freely to all firewalls of the same product type and model as the pool license managed by that Control Center. The licenses are assigned and continuously renewed for all pool-licensed managed firewalls. Box licenses derived from a renewed pool license will be updated automatically on the managed firewalls.

For more information, see How to Install and Assign Pool Licenses on a Control Center.

The Pool Licenses section on the Barracuda Activation page offers several actions for license handling. To access the context menu options, right-click a license from the Pool Licenses list:

Managed firewalls using pool licenses must renew the license by connecting to the firewall at regular intervals. The license status for each firewall is listed on the Control > Floating Licenses page. Updating the pool license float follows the following scheme: Licenses have a grace period of 15 days. The firewall starts to check the pool license state after a quarter of the grace period. If this check fails, the next attempt is made after the first half of the grade period. If this check fails, the license state enters grace mode. From now on, the firewall will attempt to contact the Control Center four consecutive times every 10 minutes until the float could be successfully updated. If a pool-licensed firewall is not able to connect to the Control Center for 15 days, all services are shut down and the license state is changed to unlicensed. 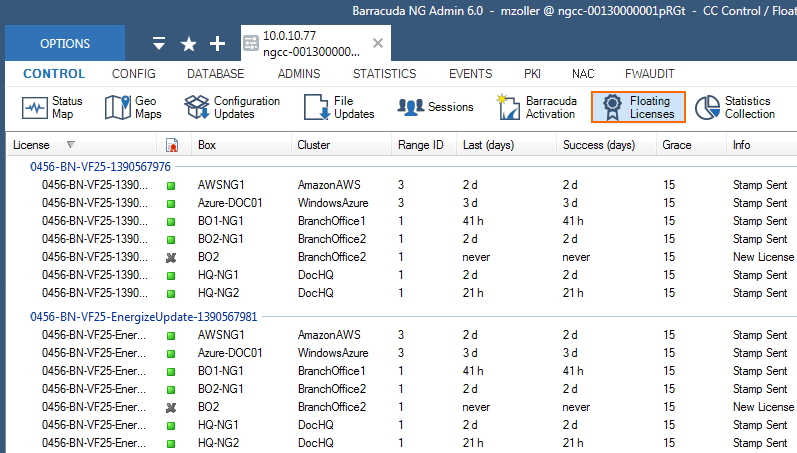 If the host-ID or MAC address of the Control Center has changed, the licenses will become invalid and enter a 14-day grace period. During the grace period, do not change settings on the CC Identity page.
Contact Barracuda Technical Support to resolve the licensing issues.