A NextGen Firewall F with multiple network interfaces can be used as a segmentation firewall for your private subnets in the VPC. Traffic passing between the private subnets is routed through the firewall, where you can apply security policies and visualize traffic in real time between the subnets. To be able to route the traffic over the firewall, the standard route for internal VPC traffic must be circumvented. By default, all traffic within the VPC is routed over the default gateway. This route cannot be overridden by other more specific routes, nor can it be changed to use the firewall as the gateway instead. Using a combination of a firewall instance with multiple network interfaces and adding a route on the client instances allows you to use the F-Series Firewall as a segmentation firewall in AWS.

Use a segmentation firewall to enforce access policies and monitor traffic passing between the subnets. When compared with an AWS native solution, a NextGen Firewall is vastly superior regarding the depth at which both traffic can be inspected and security policies applied. In addition, NextGen Admin also provides real-time traffic visibility, while the Firewall Live and History pages allow quick, fine-grained access to all the traffic currently passing through the firewall. 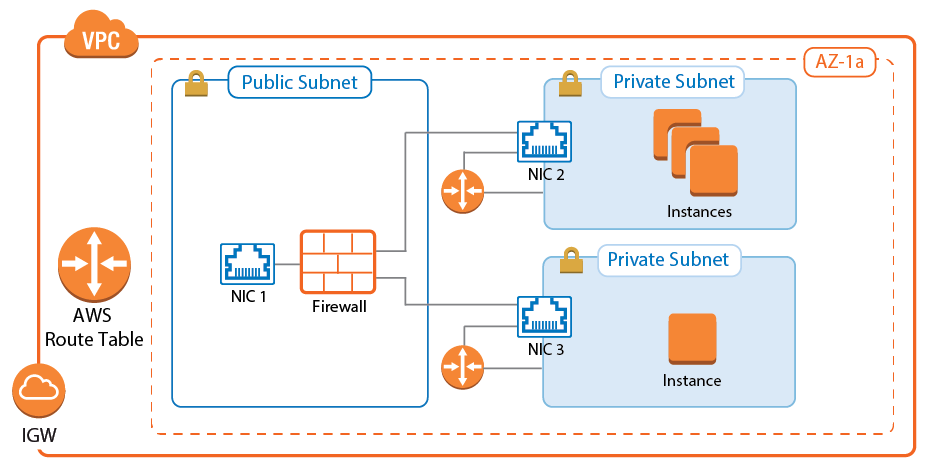 Complete the following configuration steps to deploy the NextGen Firewall F as a segmentation firewall. For more detailed descriptions, follow the links for step-by-step instructions.

Create a VPC and deploy the firewall instance

Create a VPC in an AWS region of your choice. Since each subnet will contain a firewall network interface, the subnets must be created in the same Availability Zone. A minimum of three subnets are required:

If you selected the BYOL image type, activate the license. For both PAYG and BYOL, install the available hotfixes as displayed in the DASHBOARD > Firmware Update element when logged in via NextGen Admin.

For step-by-step instructions, see How to Deploy a F-Series Firewall in AWS via Web Portal.

You now have a VPC with one public and multiple private subnets. A firewall instance with one network interface deployed is deployed into the public subnet.

For step-by-step instructions, see How to Add AWS Elastic Network Interfaces to a Firewall Instance.

For each private subnet, a dedicated AWS route table handles all traffic with destinations outside the VPC. Associate the subnet with the route table and create a default route with the network interface of the firewall in this subnet as the target.

For step-by-step instructions, see How to Configure AWS Route Tables for Firewalls with Multiple Network Interfaces.

Deploying instances to use the firewall as default gateway

It is not currently possible to configure the AWS route table to send traffic between two subnets through the firewall instance. By default, each route table includes a static route for the VPC pointing to the AWS gateway of the subnet. This route cannot be overridden by a more specific route, nor can it be deleted. To send traffic via the firewall, add a route directly on the instance. The route can be added either manually after the instance has been deployed, or automatically in the User data section.

Add the routes to User data field of the Advanced Details section.

Add the definition for the routes in the UserData section of the CloudFormation template. If multiple private subnets are used, more than one route may be required.

Log into the instance via ssh, and with root privileges enter:

The route is now in the route table. Enter route -n to list the routes:

Now that the routing and setup in AWS is complete, access rules must be configured to apply your security policies to the traffic passing between the VPC subnets:

Access rules allowing the backend instances access to the Internet must use the Dynamic NAT connection objects to rewrite the source IP of the packets to the IP address of the firewall.