However, you can reduce the number of VPN connections required by each device participating in the network by using a central VPC as a transit VPC and arranging the VPCs in a hub and spoke topology. The transit VPC uses an active-passive high availability cluster made up of two Barracuda NextGen Firewall F-Series instances in the public subnets.

The routing is handled by BGP. The spoke VPCs learn the default route from the firewall and send all traffic through the VPN gateway and the transit VPC high availability firewall cluster. The firewall learns the spoke VPC networks propagated by the VPN Gateway. When a spoke VPC is added or removed, BGP automatically propagates the changes to all connected networks.

Connecting to your on-premises network also works with a combination of BGP over TINA or IPsec tunnels. The VPN tunnels do not have to use the public IP address of the firewall as the destination; instead, they can use an FQDN defined in a Route 53 record set with a failover routing policy. The health check defined for the Route 53 record continuously checks if the primary firewall is active. When the health check fails, the IP address of the secondary firewall is automatically returned. Using an Elastic Load Balancer is not possible because the ELB is TCP only. For TINA tunnels, Route 53 or ELB is optional since TINA also works with two public IP addresses as the destination.

To deploy the AWS infrastructure of this architecture quickly, use the following CloudFormation template. The NextGen Firewall must be configured manually. This template will deploy the following AWS resources:

Complete the following configuration steps to deploy two firewalls into a transit VPC. For more detailed descriptions, follow the links for step-by-step instructions.

Create a VPC in an AWS region of your choice. Make sure the network assigned to the VPC is sized correctly and does not overlap with existing or planned on-premises networks.

For step-by-step instructions, see Step 1 to 5 in How to Configure a High Availability Cluster in AWS using the Web Portal.

Launch a firewall instance into each public subnet using either the Barracuda NextGen Firewall BYOL or PAYG images from the AWS Marketplace. Before selecting the instance type, make sure you understand the throughput requirements and size the instances accordingly. Since only one firewall is active at a time, a single instance must be able to handle the highest expected traffic load for your setup. The secondary firewall must use the same instance type.

If you are using the BYOL image type, activate the license. For both PAYG and BYOL, install the available hotfixes as displayed in the DASHBOARD > Firmware Update element when logged in via NextGen Admin. The default username is root and the default password is the instance ID. 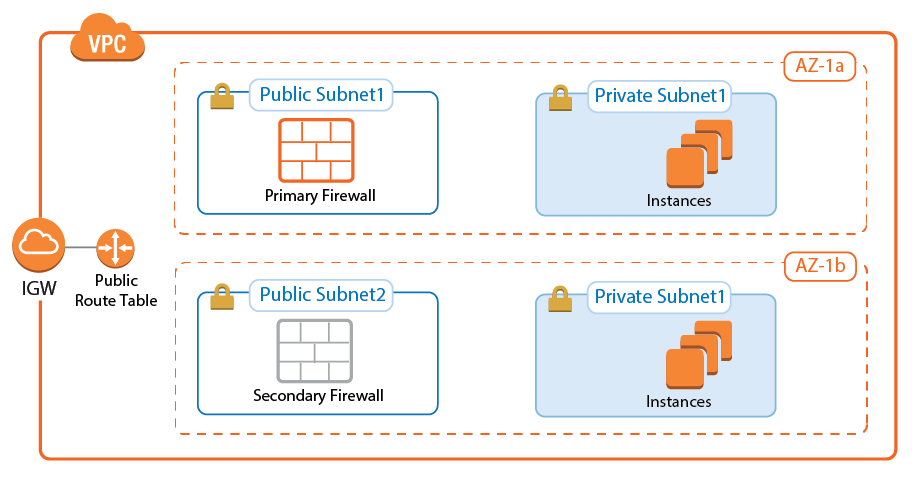 For step-by-step instructions, see Step 6 to 8 in How to Configure a High Availability Cluster in AWS using the Web Portal.

Depending on how you want to access the instances in the private subnets, you must add up to three AWS route tables: 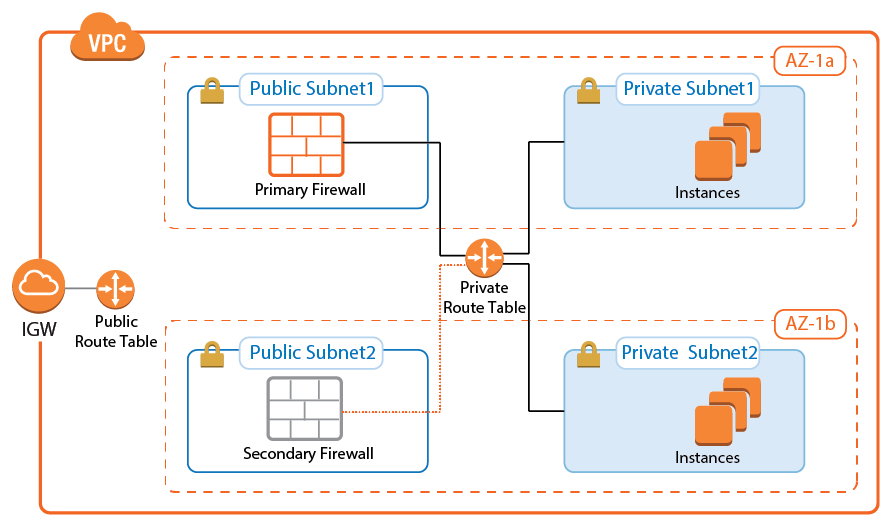 As an alternative to the two private subnet route tables, you can also use rewrite the source and destination address for the connections to the instances in the private subnets. Enter multiple IP addresses as redirection targets of the Dst NAT access rule to load balance traffic between multiple Availability Zones.

For step-by-step instructions, see Step 9 an 10 in How to Configure a High Availability Cluster in AWS using the Web Portal.

For step-by-step instructions, see How to Configure Route 53 for F-Series Firewalls in AWS.

Each spoke VPC is made up of one or more private networks connected via the AWS VPN gateway to the transit VPC firewalls. The spoke VPCs do not have an Internet gateway; all traffic will be routed over the firewalls in the transit VPC. The number of spokes supported by the firewall instance depends on how much traffic is sent through the tunnels and which firewall features are enabled.

Create a VPC in the desired AWS region. Verify that the network assigned to the VPC does not overlap with the transit VPC or the on-premises networks. In the VPC, create at least one private network.

Configure the IPsec tunnels on the transit VPC firewalls

To connect the spoke VPC to the transit VPC, configure four IPsec tunnels: two parallel IPsec tunnels to the EIP of the primary firewall and two for the EIP of the secondary firewall. The AWS VPN gateway treats these connections as if they were separate endpoints. AWS defines a /30 intermediary network for each IPsec tunnel. The IP addresses in this intermediary network are used by BGP. Define BGP neighbors for each next-hop address as per the instructions provided by AWS.

The IPsec tunnels on the primary firewall are now connected. The tunnels to the EIP of the secondary are down. Since the routing is handled by BGP, no traffic can be sent through the VPN tunnels yet. In addition, access rules in the Forwarding Firewall ruleset must allow the traffic. By default everything is blocked.

For more information, see Step 2 in How to Configure an IKEv1 IPsec VPN to an AWS VPN Gateway with BGP.

The BGP service on the firewall learns and propagates the routes from each location. Create a BGP neighbor configuration for each IPsec tunnel and each on-premises network connected to the transit VPC. If you are not using a static route in the spoke VPCs routing table, propagate the default route to the BGP neighbor for each spoke VPC. The VPN gateway automatically propagates the VPC network via BGP. Since spoke VPCs are always connected by two parallel IPsec tunnels, the route over one IPsec tunnel should be preferred over the other.

Configure the BGP service on each firewall to exchange information with the BGP service on the other side of the VPN tunnels. Using Route Maps, modify the routes learned for the second of the parallel IPsec connections. By lengthening the AS PATH of the IPsec tunnels, traffic is sent through the first tunnel at all times, unless the tunnel is down.

For more information, see Step 3 in How to Configure an IKEv1 IPsec VPN to an AWS VPN Gateway with BGP.

By default, the Forwarding Firewall service blocks all traffic not explicitly allowed by an access rule. Since all traffic is routed through the transit VPC, create access rules to allow access for individual services and/or entire networks.  Access rules allowing traffic through the AWS VPN gateway IPsec tunnels must set the following advanced access settings:

For more information, see Step 4 in How to Configure an IKEv1 IPsec VPN to an AWS VPN Gateway with BGP.

If your transit VPC is created with spokes in a single CloudFormation template, the instances will not have Internet access during launch because the default route over the firewalls is not active yet. To work around this, you can either use multiple templates or, if possible, configure your EC2 instances to use VPC endpoints instead of going over the Internet for the provisioning process.

If your spoke is already connected, verify that access rules are in place that allow the new instance access to all resources required during the provisioning process. If unsure, log into the active firewall and use the Firewall > History page in NextGen Admin to check if traffic from the instance was blocked.

To be able to forward traffic between your AWS VPC and your on-premises networks, create site-to-site VPN tunnels between the high availability cluster in the transit VPC and the VPN gateways in each remote location.

The networks of the spoke VPC are propagated via BGP over the VPN tunnels. BGP is used to propagate the AWS VPC networks to your on-premises locations. Depending on the remote device, you can use either Barracuda's proprietary TINA  VPN or the industry standard IPsec VPN protocol. Failover and preference of the VPN tunnel to the primary firewall is handled by BGP. 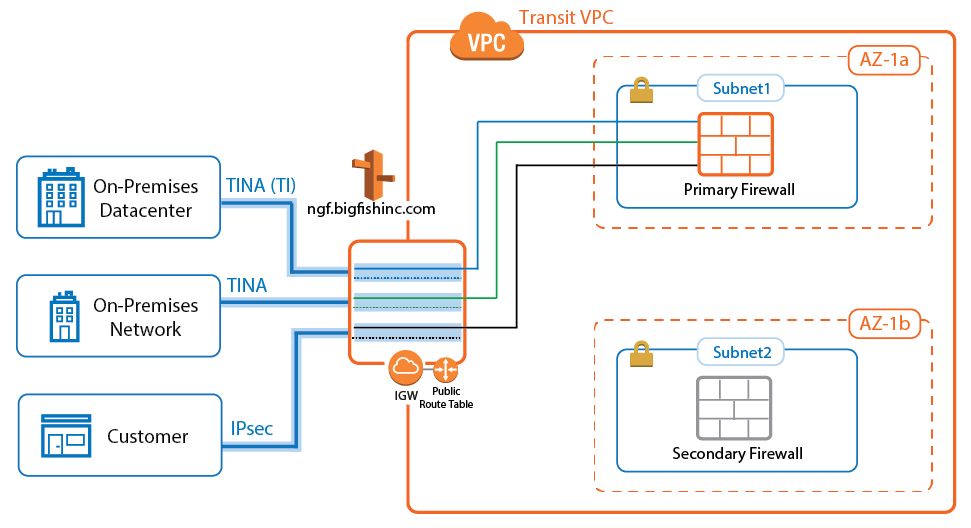 If the remote location uses an F-series Firewall, you can take advantage of the TINA VPN protocol. TINA offers many enhancements not featured in the standard IPsec protocol, such as Traffic Intelligence, Traffic Compression, and WAN Optimization. Traffic Intelligence is a logical layer used to manage multiple parallel VPN tunnels (transports) in one VPN tunnel configuration. So if your remote location has multiple Internet connections (perhaps in combination with AWS Direct Connect), all connections can be combined into one VPN tunnel. Traffic intelligence patterns in the connection object of the access rule determine how the traffic is distributed over the VPN transports and failover behavior. WAN Optimization and Compression reduces the amount of traffic sent through the tunnel by using data deduplication.

For step-by-step instructions on how to create a TINA VPN tunnel in combination with BGP, see How to Configure BGP Routing over TINA VPN.

For step-by-step instructions on how to configure Traffic intelligence, see Traffic Intelligence.

For step-by-step instructions, see How to Configure BGP Routing over IKEv1 IPsec VPN.

Just like when connecting the spoke VPCs, the firewall blocks all traffic by default. To allow connections to the networks learned via BGP, create pass access rules on both firewalls. These rules must be the same on both firewalls to ensure that if the connection fails over to the secondary firewall, the same policies are applied.