VPN Apps in the SSL VPN

VPN Apps for the SSL VPN are used to allow users to connect to internal web applications not suitable for SSL VPN Web Apps or native apps. CudaLaunch transparently opens a client-to-site VPN tunnel and then opens the resource in the default browser. VPN Apps are available on Windows, iOS, and Android clients through the CudaLaunch app.

DNS tunnels make use of TXT or NULL DNS records to tunnel traffic through DNS queries and responses. The NextGen Firewall can now detect and block DNS tunneling via protocol object in Block or Deny application rules.

The NextGen Firewall and Control Center can now be deployed in your Azure Stack environment. You can deploy either by making the standard Azure Marketplace images available for your users, or by uploading and then deploying the BYOL VHD disk images from the Barracuda Download portal. 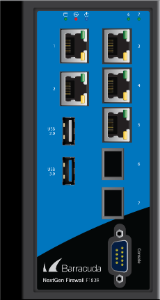 The F183 is a desktop appliance with 6 gigabit and 2 fiber ports.