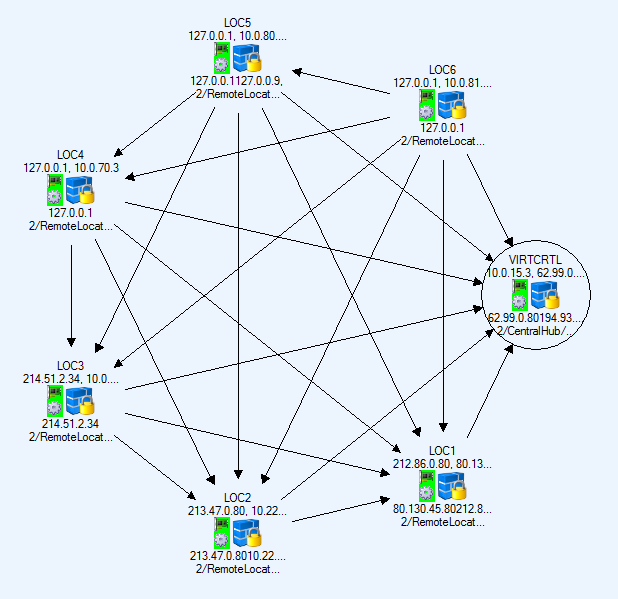 Organizing your Firewalls into Clusters and Ranges

To be able to use distributed services and global firewall objects efficiently, you must organize your firewalls in the respective clusters and ranges. If all your firewalls are running the same firmware version, you can use just one cluster. If some of your firewalls are running an older firmware version, you will need to create a cluster for each version. In this example, the headquarters and branch office firewalls will each use their own cluster since using multiple clusters makes managing the configuration easier.

Global Firewall Objects allow you to enter the network addresses once for all the networks, public IP addresses, and special servers, and then to reuse them when configuring the services. A Global Firewall Object on the global or range level can be overridden by a different IP address or network on the range or cluster level. This allows for one-time configurations in cases where one cluster uses a different IP address or network from all other configurations. You can also employ this functionality to enforce the usage of the same firewall object names for all your configurations. This allows you to create repository entries to be reused for all clusters. Site-specific firewall objects are globally defined in name and type, and the IP addresses or networks are entered in the Server Properties of the virtual servers. Site-specific Network Objects can be used only in the Forwarding and Distributed Firewall services. 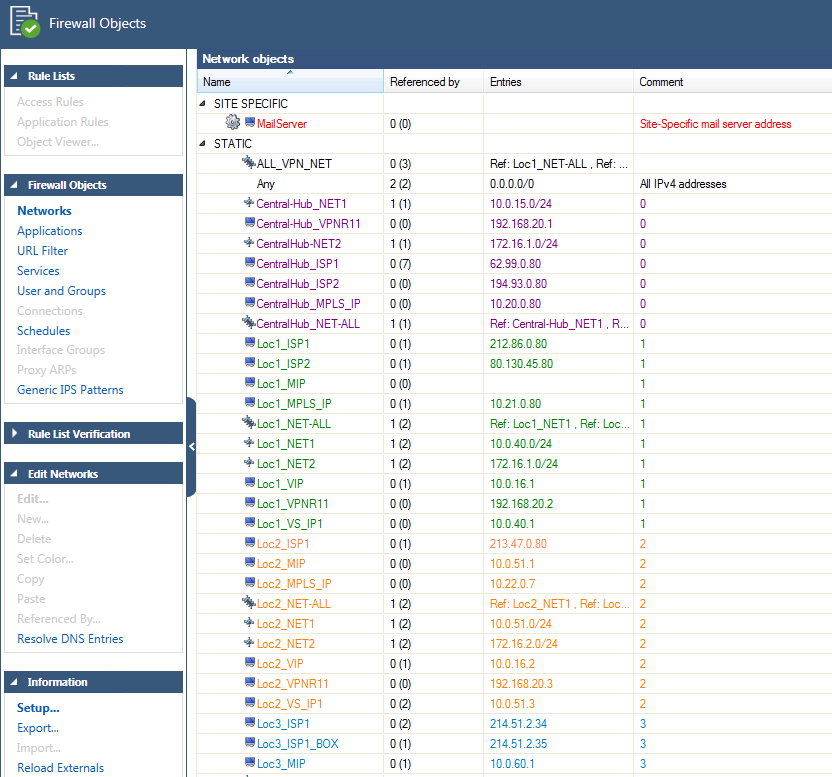 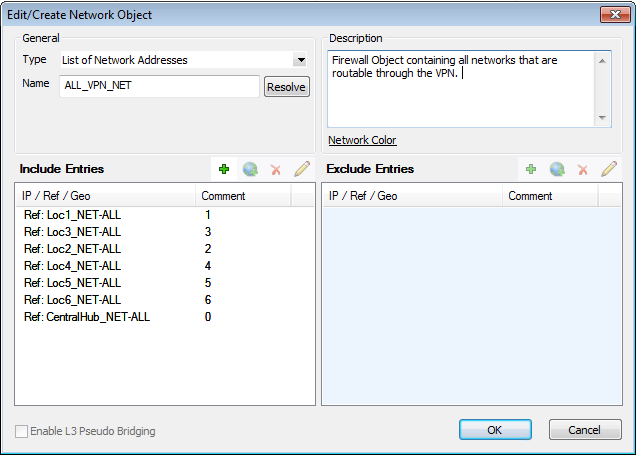 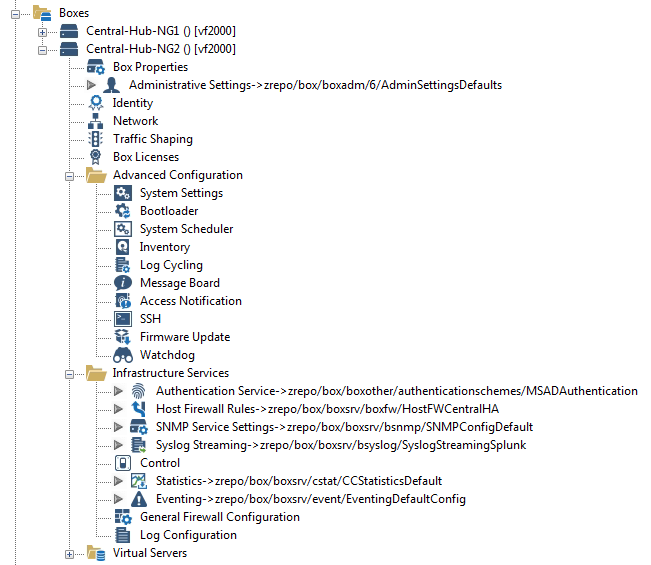 The CloudGen Firewall units must be managed by the Control Center and have connection to the Internet.

You must create the necessary services for every virtual server: 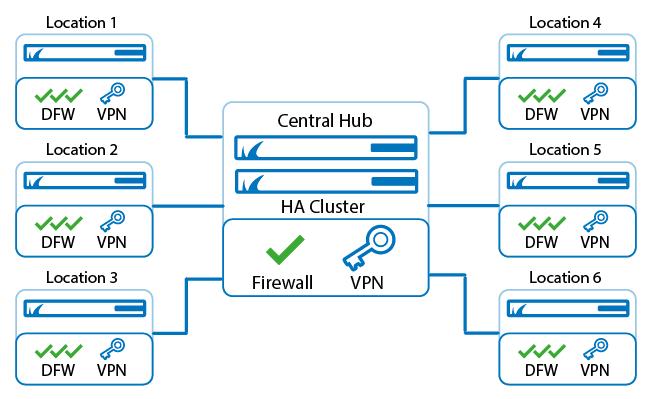 Site-to-Site VPN tunnels on the CloudGen Firewall use the Barracuda-proprietary VPN protocol. TINA offers many enhancements not featured in the standard IPsec protocol, such as Traffic Intelligence, Traffic Compression, and WAN Optimization. Traffic Intelligence allows you to prioritize data flow and distribute VPN traffic between multiple Internet connections. WAN Optimization and Compression reduces the amount of traffic sent through the tunnel by using data deduplication. 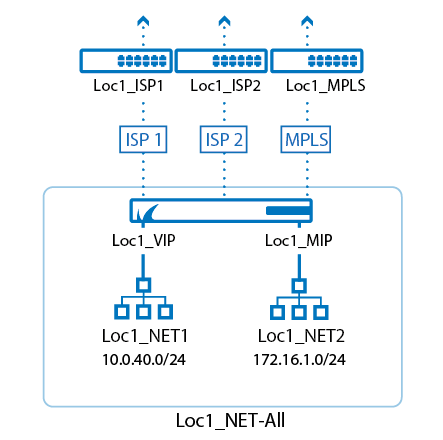 Configure the IP address the VPN service listens on. If you are using firewalls with a dynamic Internet connection (DHCP, xDSL,..), use 127.0.0.1 as the Service IP and create an App Redirect access rule to redirect VPN traffic to the VPN service. 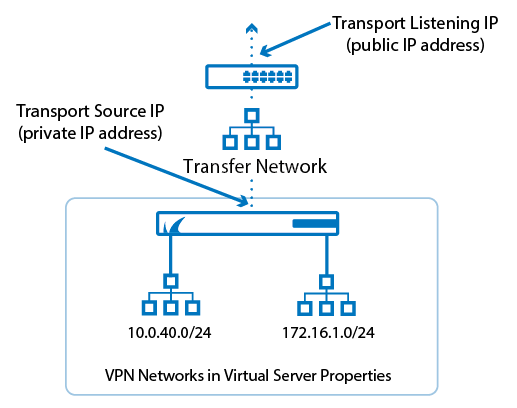 Transport Settings for Firewalls with a Dynamic Internet Connection:

The networks used as local networks by the GTI Editor are configured in the Server Properties of each CloudGen Firewall. Use the LocX_NET_ALL network object. Referencing network objects instead of directly entering the networks has the advantage that adding a network to a location is as simple as editing the corresponding network object.

For a network with a large number of Site-to-Site VPN tunnels, it is not practical to configure each tunnel separately on both endpoints. The GTI Editor on the Control Center simplifies and automates this task. Add the VPN services managed on the Control Center into a VPN group. Each VPN group shares VPN configuration settings for encryption, Transport (TCP/UDP/TCP&UDP), and basic Traffic Intelligence configuration. 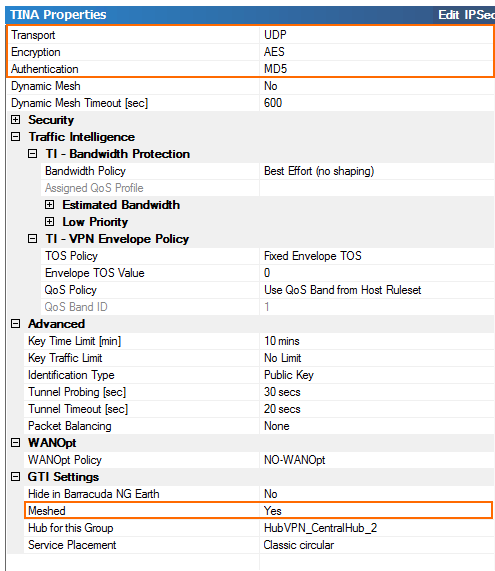 Add the VPN services to the VPN Group. If you are using the Range or Cluster GTI Editor, make sure to add only VPN services from that Range or Cluster to the group. Click on the HQ VPN service and select Hub. Since we selected the meshed option, the GTI Editor creates one VPN tunnel from each CloudGen Firewall to all other firewalls in the VPN Group. If all the listening and transport IP addresses you configured for each VPN service were correct, all VPN tunnels will be up and running with a single transport using the first IP address in the Transport IP address list to establish the VPN tunnel. If the connection fails, the other IP addresses in the list are tried sequentially. In some cases, you have to adjust the configuration manually:

For each remaining tunnel status that is still red, log into the CloudGen Firewall that initiates the VPN tunnel and check the VPN tab Status to gather more information. Adjust the settings for the tunnel as needed. Verify that the active CloudGen Firewall can reach the transport listening IP address of the passive tunnel partner. 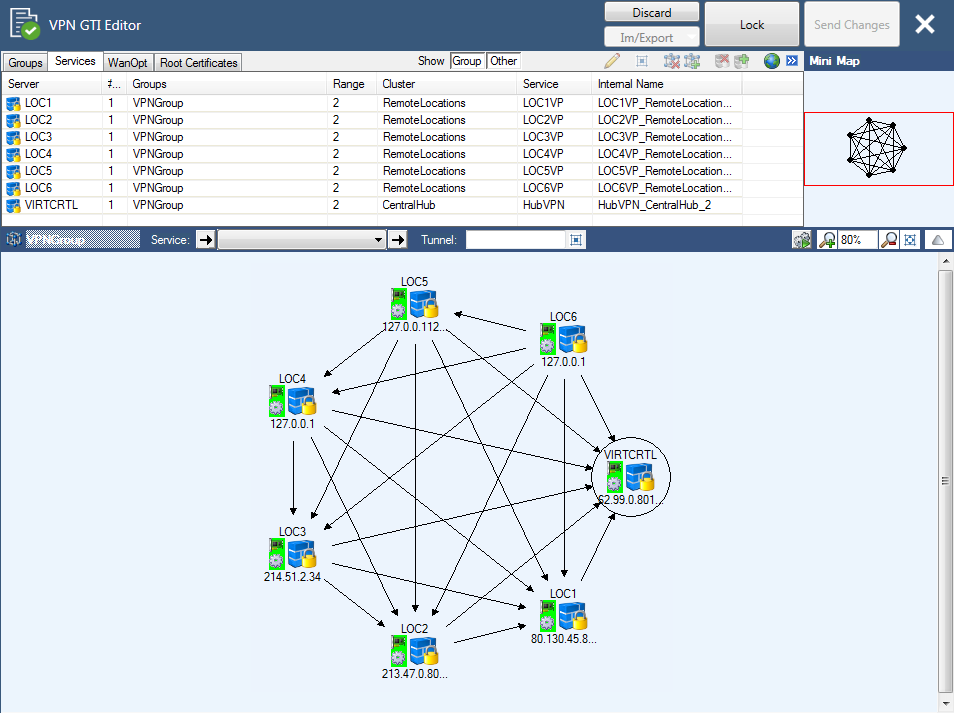 Without Traffic Intelligence, the VPN tunnel can use the bandwidth of only one of the Internet connections of the CloudGen Firewall. So for firewalls using multiple WAN connections, add an additional transport for each connection to the VPN tunnels. Assign each transport a TI Classification and TI ID. When multiple IP addresses are used as Transport Listening IP addresses for one VPN service, the first IP address is always used to create the VPN tunnel. When that IP address is unavailable, the next IP addresses in the list are used until a VPN tunnel can be established. This behavior is undesired if you are using multiple, differently sized WAN connections. Instead, you should assign single, explicit Transport Listening IP addresses to each transport. You thereby know the available bandwidth for the VPN connection and can then assign matching traffic-shaping policies.

Through the TI Learning Policy settings you can determine which CloudGen Firewall assigns the VPN transports for the connection (the TI Master). To avoid two TI masters overriding each other by sending traffic through different transports, the VPN hub must be configured to be the TI master while all remote firewalls are configured to be TI Slaves. 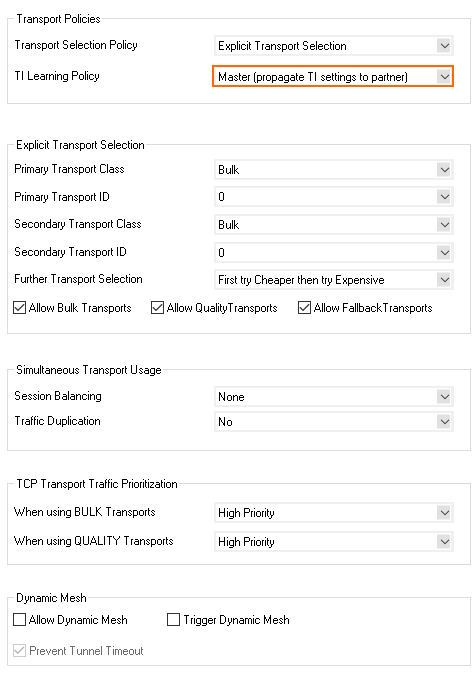 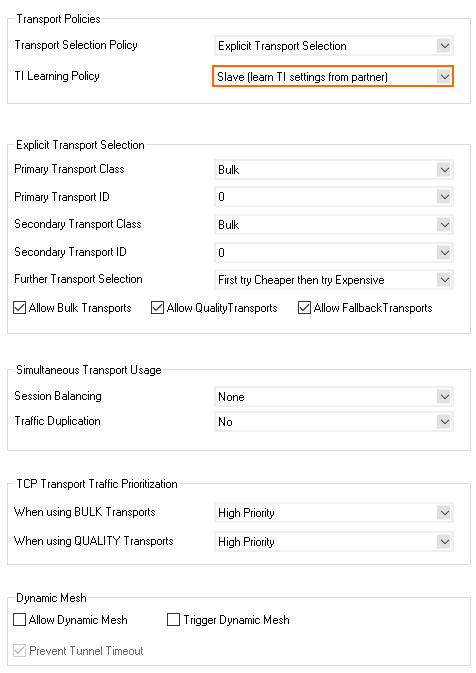 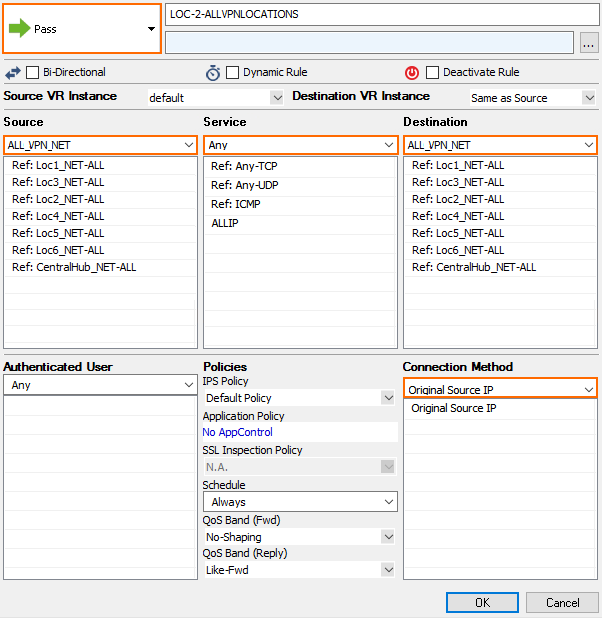 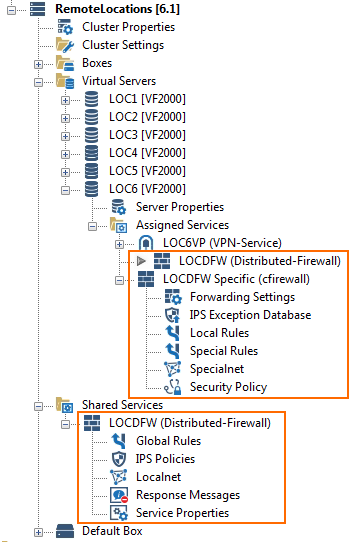 The CloudGen Firewall units using a dynamic Internet connection must redirect all incoming VPN traffic to the VPN service running on the 127.0.0.1 IP address. 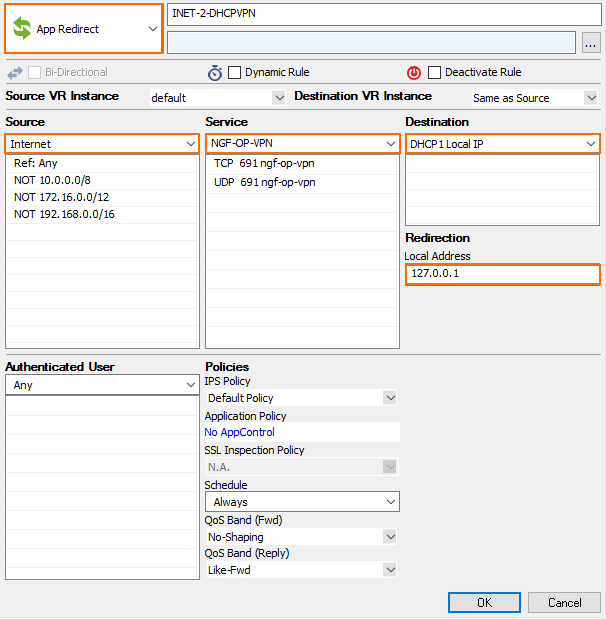 A Dynamic Mesh VPN network allows you to use the advantages of a fully meshed network without having to provide the resources needed for the large number of static VPN tunnels on every unit. All remote units are connected by a static TINA VPN tunnel to a central CloudGen Firewall acting as the VPN hub. When relay traffic from a remote CloudGen Firewall to another remote CloudGen Firewall is detected by the VPN hub, a dynamic VPN tunnel is imitated between the two remote firewalls. As soon as the dynamic VPN tunnel is up, traffic is transparently redirected through the VPN tunnel that now directly connects both locations. The dynamic tunnel is completely transparent to the user and offers better latency than relaying the traffic through the VPN hub. Dynamic tunnels are triggered by the dynamic-mesh-enabled connection object of the VPN hub. Configure the VPN hub as the TI master, and the remote units as TI slaves.  The TI slaves will automatically learn the Dynamic Mesh and TI settings from the master. Traffic that does not match an access rule with a dynamic-mesh-enabled connection object on the TI master continues to be sent through the VPN hub.