To build highly available services in AWS, each layer of your architecture should be redundant over multiple Availability Zones. Each AWS region is made up of at least two isolated Availability Zones. In case one Availability Zone goes down, your application continues to run in the other datacenter without interruption or even minimal failover time. For the Barracuda CloudGen Firewall, this means deploying two firewall instances to two public subnets, each in a different Availability Zone. The firewalls are in an active-passive cluster. Both firewalls share a virtual server containing such services as the Forwarding Firewall or VPN service. Should the primary firewall become unavailable, the virtual server is immediately started on the secondary firewall. The now-active secondary firewall connects to the underlying cloud platform and rewrites the routes in the AWS route table to use the now-active firewall as the gateway device for the backend instances. After the route table is rewritten, normal operations are resumed, even if one of the two Availability Zones is experiencing an outage. Failing over the virtual server, although fast, is not transparent to the user. Existing connections will time out.

High Availability Clusters must be sized for the expected peak load. If the expected workload is dynamic in nature and a default gateway is not required, use a CloudGen Firewall Auto Scaling cluster instead. 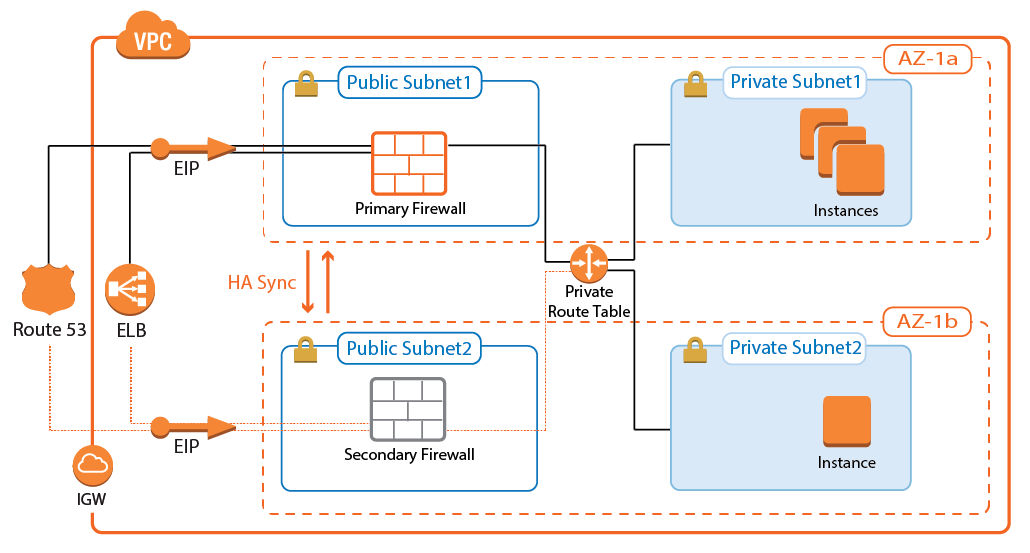 Use Cases for a CloudGen Firewall High Availability Cluster 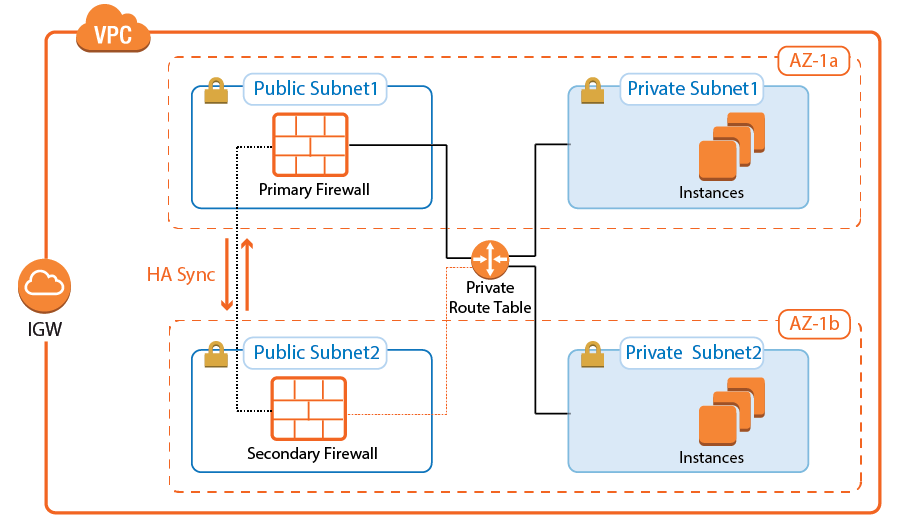 On the firewall, go to CONTROL > Network > AWS Routes. All the route tables for the VPC are listed. Routes that use one of the firewalls are shown with a green icon. During takeover, the icon temporary turns red to indicate that a failover is in progress. After the route table rewrite, the network interface ID (eni-123456) matches the now-active firewall.

Using two public IP addresses for the active-passive High Availability Cluster may not always be possible. To use a single FQDN that always sends traffic over the active firewall, you can use either a classic Elastic Load Balancer or Route 53. Both services are similar in that they use health checks and send traffic to the healthy destination. For TCP-only services, either service can be used. For UDP-based services, such as IPsec, use Route 53.

The classic Elastic Load Balancer is a managed layer 4 TCP load balancer. The load balancer can only be addressed by the DNS name associated with it. It is not possible to work with the IP address the hostname resolves to directly because the underlying load balancing instances may change at any time.

Traffic passing through an Elastic Load Balancer rewrites the source IP address to that of the load balancer instance. If your application requires the public IP address of the client, use Route 53 instead.

For step-by-step instructions, see How to Configure an AWS Elastic Load Balancer for CloudGen Firewalls in AWS.

For step-by-step instructions, see How to Configure Route 53 for CloudGen Firewalls in AWS.

The Barracuda Firewall Control Center is a central management appliance for the CloudGen Firewall that can be deployed as a virtual appliance on-premises or in the cloud. Managing the High Availability Cluster with a Barracuda Firewall Control Center separates the firewall configuration and monitoring from deployment and integration with other AWS services. This is especially useful for highly specialized or large departments with dedicated network security teams and multiple developer teams using automatic deployments. Managed firewalls are preconfigured on the Control Center. During provisioning of the firewall instance, the firewall configuration and, optionally, licenses are automatically retrieved from the Control Center. To use BYOL licenses, pool licenses bound to Control Center are used instead of single BYOL licenses bound to the EC2 instance of the firewall. Pool licenses are available in multiples of 5.

By default, the Forwarding Firewall service blocks all traffic. To allow traffic through the firewall, you must create access rules with an allow action, such as Pass or Dst NAT. When creating the rules, make sure you create them so they will match the same type of traffic independent of which virtual server the firewall service is running on. For Dst NAT and App Redirect rules, enter both the management IP address of the primary and secondary firewalls, or use the All Firewall IPs.

Internet to Backend Services Using the Firewall as the Default Gateway

Create the following access rule to forward traffic from the Internet to an internal web server, where the web server uses the firewall as the default gateway. 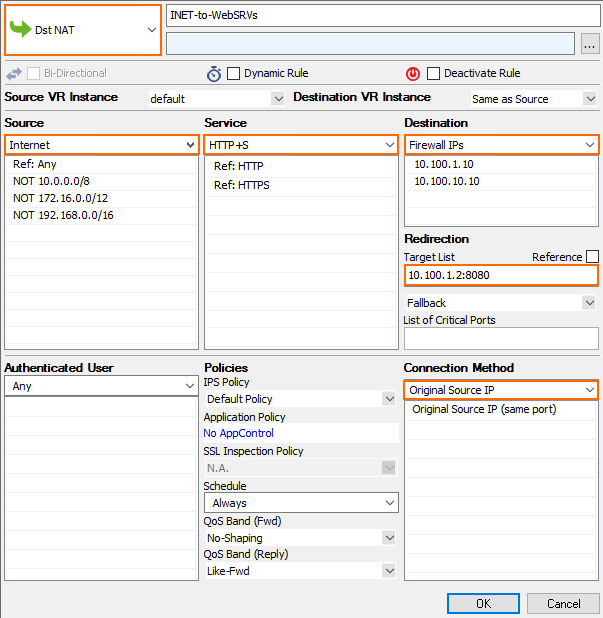 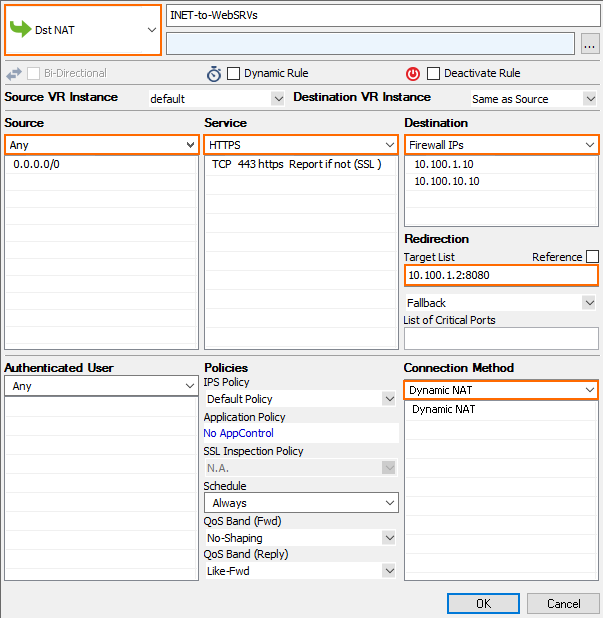