A CloudGen Firewall Cold Standby Cluster is a low-cost architecture for AWS deployments that minimizes downtime to only a few minutes in case of failure of the underlying hypervisor hardware, the firewall instance, or the complete Availability Zone. From a technical standpoint, the Cold Standby Cluster is a CloudGen Firewall Auto Scaling Cluster with the size set to one. The firewall configuration is securely stored and synchronized through AWS backend services. Replacing the Elastic Load Balancer used in the CloudGen Auto Scaling Cluster with a floating Elastic IP allows the use of both TCP- and UDP-based services on the firewall. The default template uses hourly PAYG licensing, but can be modified to use pool licenses for Control Center-managed instances. 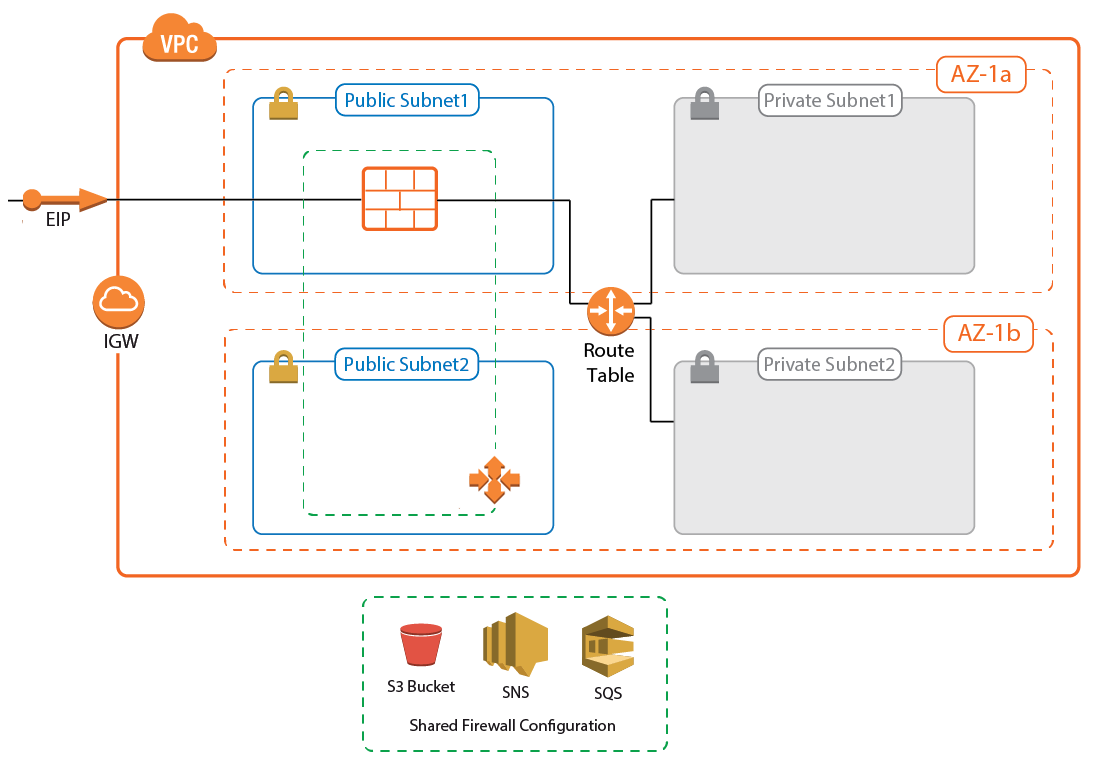 Use Cases for a CloudGen Firewall Cold Standby Cluster

The CloudGen Firewall Cold Standby Cluster is used to secure access to resources in the private networks of its own VPC, or to deploy in a Transit VPC as a part of a larger cloud infrastructure.

The Firewall Control Center is a central management appliance for CloudGen Firewall, that can be deployed as a virtual appliance on-premises or in the cloud. Managing the Cold Standby Cluster with a Firewall Control Center separates the firewall configuration and monitoring from deployment and integration with other AWS services. This is especially useful for highly specialized or large departments with dedicated network security teams and multiple developer teams using automatic deployments. Managed firewalls are preconfigured on the Control Center. During provisioning of the firewall instance, the configuration is retrieved from the Control Center. Optionally, pool licenses can be used that are bound to the Control Center license instead of the EC2 instance of the firewall. Pool licenses are available in multiples of 5. 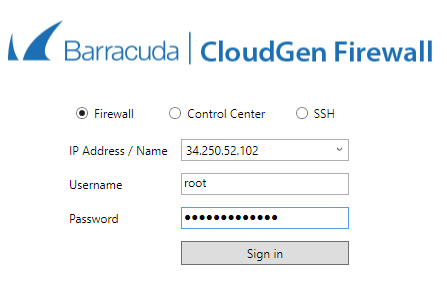 Note that only routes for which there are AWS CLI commands in the user data section of the templates are changed. The Cold Standby Cluster does not monitor the route tables in the VPC. If this is required, use a CloudGen Firewall High Availability Cluster instead. 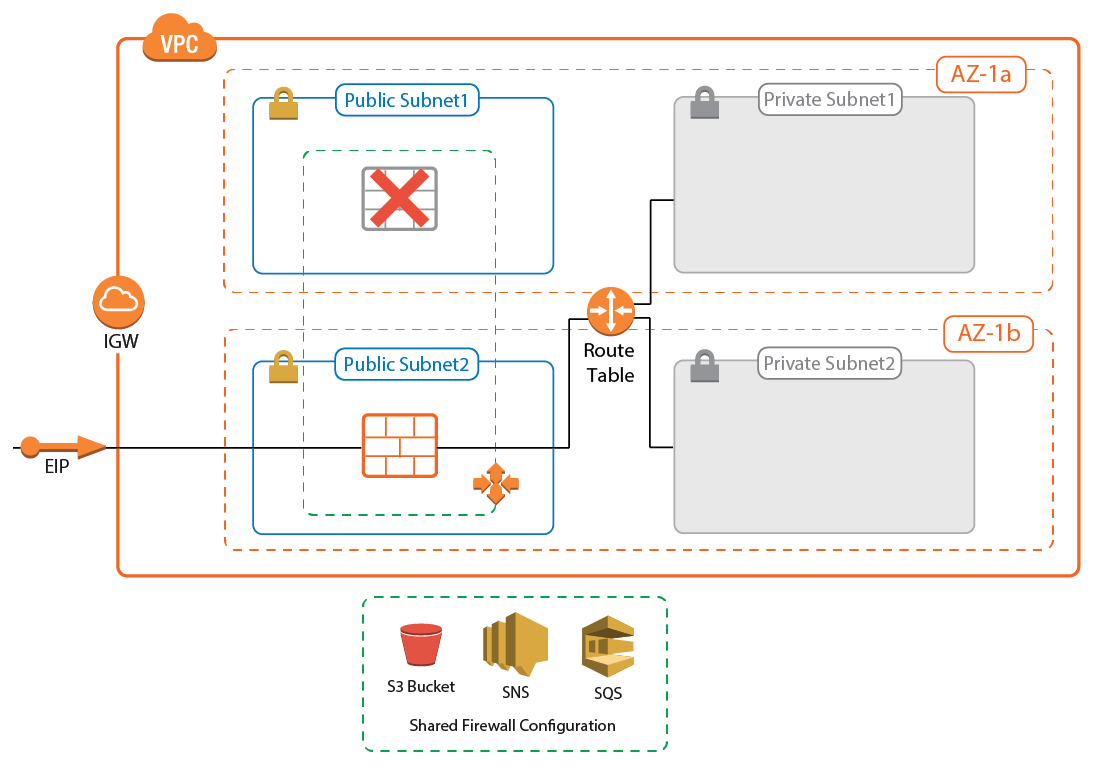 Hotfixes are published by Barracuda Networks when an issue requires immediate attention, such as newly discovered security vulnerabilities or critical bugs in the firmware. Hotfixes are installed through the Firewall dashboard in Barracuda Firewall Admin. New instances in the cluster automatically install the same hotfixes when the cluster scales. Most hotfixes reboot the firewall. Consider this when setting the health check grace period because it will take longer for an instance to be ready when multiple hotfixes need to be installed. If the health check is resumed too early, while the firewall is still installing the hotfix or rebooting, the instance is terminated because it is deemed unhealthy. This results in a loop of starting and terminating instances.

Although possible, it is not recommended to install firmware updates like hotfixes through the Update element on the Barracuda Firewall Admin dashboard. Instead, replace the AMI in the parameter file of your template and update the CloudFormation stack. The AMI for the new firmware version is listed in the Manual Launch tab of the listing for the Barracuda NextGen Firewall PAYG image in the AWS Marketplace. 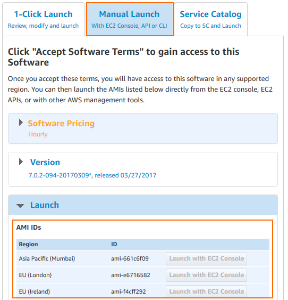 Site-to-site VPN tunnels transparently connect on-premises networks. The CloudGen Firewall supports TINA, IPsec IKEv1, and IKEv2 VPN protocols. Since ESP is not supported, IPsec VPN tunnels must use NAT-T. It is recommended to configure the CloudGen Firewall to be the active VPN endpoint. For all instances in the private subnets using the firewall as the default gateway and all instances in VPCs connected via the AWS VPN gateway, the site-to-site VPN tunnel is fully transparent in both directions. If VPC peering is used and the firewall cannot be configured to be the default gateway for the instance, the source IP address for the traffic leaving the tunnel must be rewritten to the address of the DHCP interface of the firewall. Resources in peered VPCs cannot connect directly to the remote networks.

For step-by-step instructions, see How to Create a TINA VPN Tunnel between CloudGen Firewalls.

For the Intrusion Prevention System to scan packets matching an access rule, select the IPS Policy in the Pass or Dst NAT access rule. Depending on the configuration of the IPS, malicious traffic patterns are now blocked or reported. For SSL-encrypted traffic, it is recommended to use SSL offloading on the ELB to allow the IPS to analyze the decrypted traffic. This saves processing power on the firewall. If end-to-end encryption is required for regulatory reasons, enable SSL Inspection on the access rule and in the IPS configuration to also scan SSL-encrypted traffic. 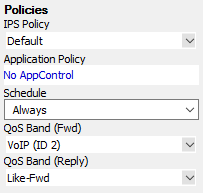 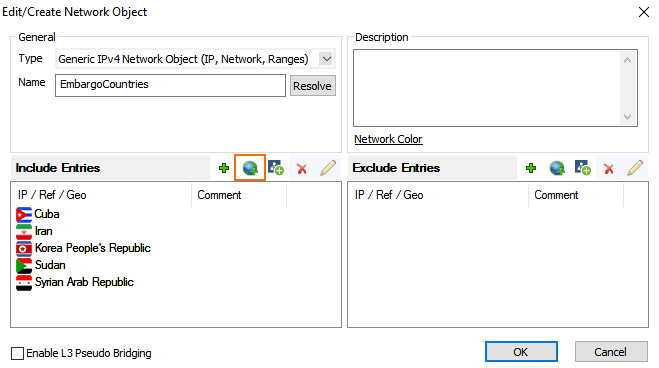 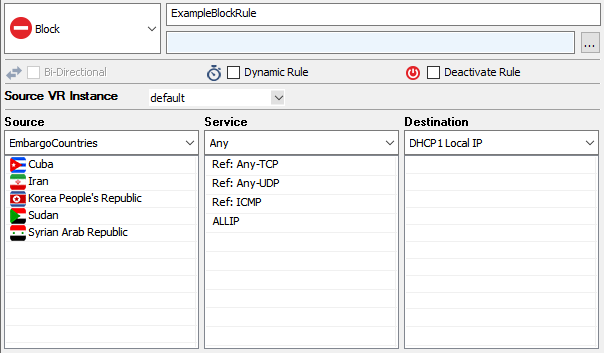 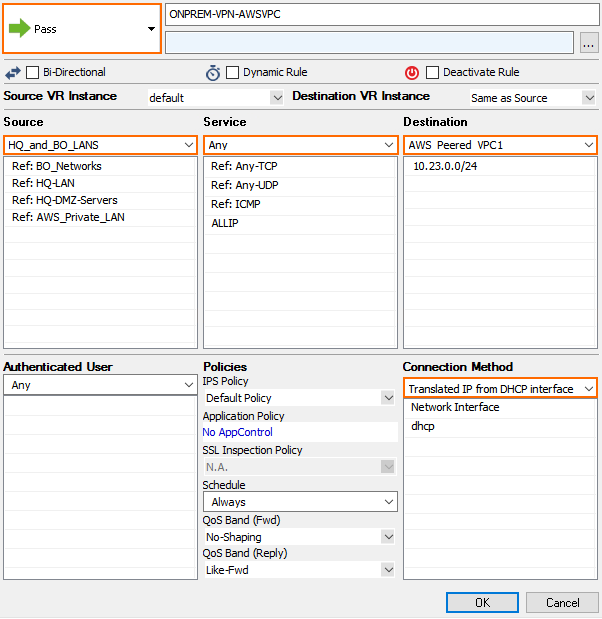 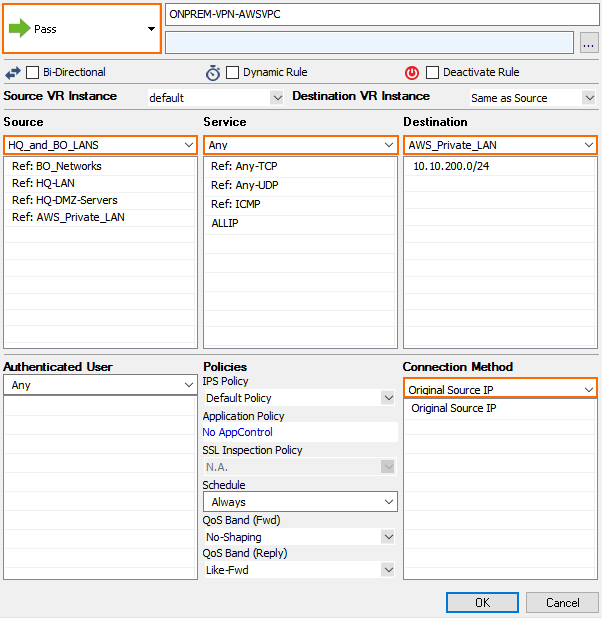 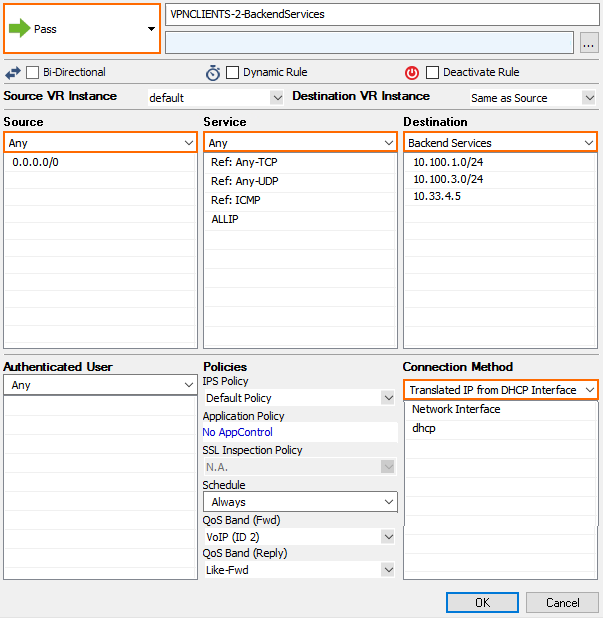 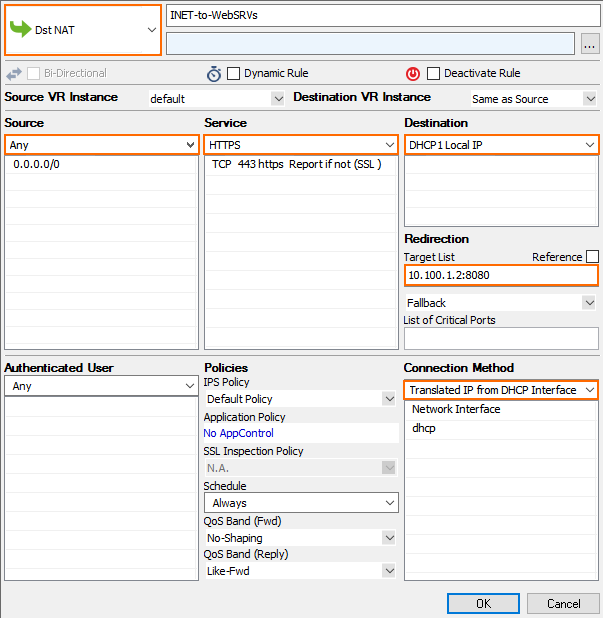