How to Configure a Firewall for Zero Touch Deployment 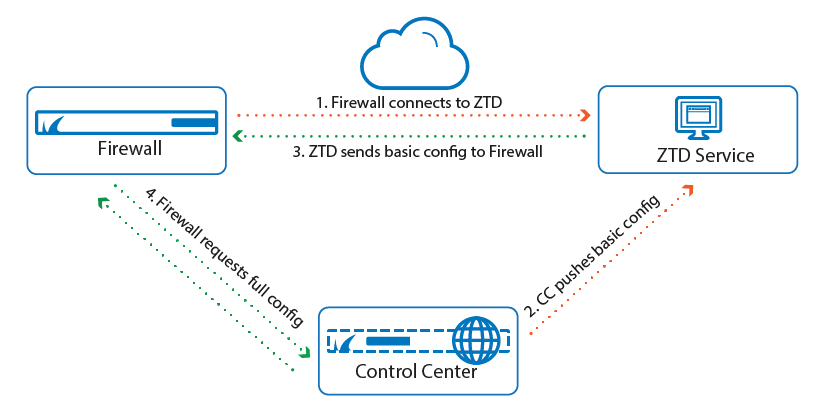 Configure the Control Center to connect to the ZTD portal.

Prepare the firewall configuration on the Control Center. Verify that the cluster version and the firmware installed on the firewall match.

If the firewall was not part of a ZTD order, it can still be associated with the Control Center by manually claiming the appliance. The serial number and linking code required to claim a firewall is included in the invoice email and on the back of the Quick Start Guide included with the firewall. It is not possible to claim an appliance that has already been claimed on a different Control Center or that has been ordered as part of a ZTD order.

Push the basic configuration for the claimed firewall to the Zero Touch Deployment service.

Go to CONTROL > Zero-Touch Deployment and verify that the appliance state is In Progress.

As soon as the claimed firewall connects to ZTD, the firewall uses the basic configuration to connect to the Control Center. The ZTD status is Completed.

Troubleshooting information can be found in the Zero Touch Deployment service web interface or in the ZTD log file Box/Config/daemon.log  and Box/Config/ztd.log