Virtual routing and forwarding (VRF) is a technology based on the operating principle of a physical router. Unlike a single router, virtual routers (VR) can be run simultaneously as multiple instances. Each of these instances uses its own routing and forwarding table. Because each virtual router instance (VRI) runs autonomously, network traffic on the assigned interfaces is separated from the traffic managed by other virtual routers. This special separation of networks increases network security without having to use VPNs like on a common network. Because it is possible to use the same IP addresses or IP ranges on multiple virtual routers, which can even overlap without conflicting each other, virtual routers can also be used for managing network traffic for multiple networks with identical network configurations simultaneously on the firewall.

Virtual routing can be used to segment network paths without using additional devices. The number of network paths is limited only by the number of available network interfaces. The concept of keeping traffic on multiple network paths separated can be overridden by configuring access rules that forward specific traffic from one path to another. As an example, all traffic from different network paths can be routed to a common path that leads to the Internet, thereby reducing the overhead for configuring access rules for routed traffic that flows from different networks to the Internet simultaneously. By combining different types of interface types, like network, VLAN or bundled interfaces, the different possibilities offer a huge variety of applications. 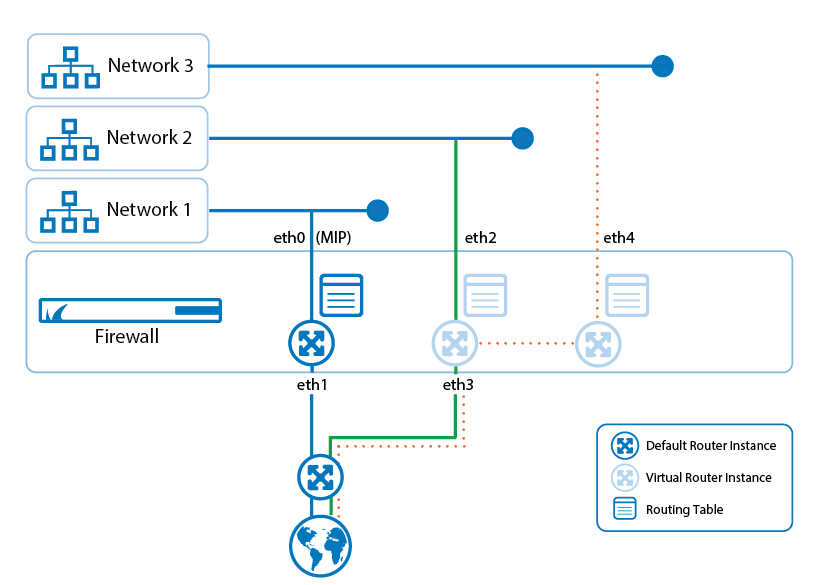 Never change a VR ID that has already been assigned to a VR instance!

If it is necessary to change the VR ID of a virtual router instance, be prepared to plan the usage of VR IDs. In case VR instance are already configured, delete existing VR instances completely from the firewall before assigning new IDs!

The maximal number of additional configurable virtual router instances varies depending on the firewall model:

VLANs can be configured for each network interface. If necessary, both network and VLAN interfaces can be combined to Ethernet bundled interfaces. With their specific characteristics, each of these interface types can be assigned to a virtual router.

Because licenses are bound to the MAC address of the network interface on which the management IP is configured, the management interface must always reside under control of the default router.

Never assign the management IP to an interface that is managed by an additional virtual router instance unless you want your firewall to fall back into grace mode.

For more information about the grace period and the validity of licenses, see Validity.

All services that run on top of a server are available only for the default router instance. Some services can be used on additional virtual router instances if certain conditions are met:

If Application Control is licensed, some restrictions may apply.

Access rules control how and whether traffic can pass from one interface to another. If only one router is used on the firewall, managing an access rule in the rule list is straightforward. However, if multiple virtual router instances live side by side in a common environment, it is recommended to build rule lists in order to maintain an overview of the access rules that refer to different virtual router instances.

For more information, see How to Create New Rule Lists.

Configuring a virtual router is similar to configuring IP addresses and routing tables. However, there are some differences in the workflow due to the conditions described in this article.

For more information, see How to Configure and Activate a Virtual Router Instance with Hardware, Virtual, VLAN, or Bundled Interfaces.

The idea of virtual routers is to separate traffic between multiple network paths. In certain cases, however, it may be useful to redirect traffic between separated paths or from multiple paths to a common path, e.g., to the Internet.

For more information, see How to Redirect Traffic between Multiple Virtual Router Instances.

Virtual routers can also be configured on HA partners. Because HA partners must (with some exceptions) be configured identically, there are three different ways for configuring virtual routers depending on how the partners are managed in a network environment. In all cases, the administrator is responsible for setting up an identical configuration in order to ensure that syncing between the two HA partners will work as expected.