The Domain Name System (DNS) is organized as a hierarchical tree. This tree contains information for mapping Internet hostnames to IP addresses and vice versa. The structure is stored as information in a distributed database that is managed by multiple DNS servers. The role of the CloudGen Firewall as a DNS server (authoritative, primary, secondary, caching-only) depends on how and what part of the tree structure is managed by a name server and how the servers exchange information to keep the tree's information up to date.

Barracuda's implementation of the DNS extends the basic functionality of the BIND-based DNS system by additional features. Health probes provide a means to check the availability of certain target hosts. Listeners can be explicitly configured to snoop for incoming DNS resolving requests on selected interfaces. These two main features can then be combined to allow DNS load balancing depending also on the availability of certain targets.

The Barracuda CloudGen Firewall can act both as an authoritative (primary and/or secondary) and a caching-only DNS server, but it cannot run both at the same time.

Based on its factory settings, the CloudGen Firewall is operating as a caching-only DNS server and takes complete care of resolving the query for a client on the LAN. For more information, see How to Configure DNS Settings and How to Configure a Caching DNS Service.
The resolving strategy for queries originating from remote networks depends on further configurations. Because of this initial configuration as a caching-only DNS server the CloudGen Firewall can query the related DNS server(s) on the Internet and do the whole license activation after being powered up for the first time.

If the firewall operates as an authoritative server (primary/secondary), it will return definitive answers to DNS queries about domains and domain hosts specified in its configuration (primary zone / secondary zone). A firewall can operate simultaneously both as a primary and secondary DNS server. For example, it can manage configured primary zones for its own domain and secondary zones for a foreign domain as copies from another primary DNS server. As an authoritative DNS server, the CloudGen Firewall can also answer DNS queries from remote networks.

The CloudGen DNS service manages domains and hosts. All information about hosts and associated IP addresses is defined in resource records where each record holds a key value (record type identifier) that classifies the rest of the information, e.g., information about whether the record describes a zone (SOA), a name server (NS), a web server (A / AAAA), or a mail exchanger (MX). For an easier configuration, you can select the requested record type out of a set of predefined record classes during the configuration process. In all resource records, additional information like time-to-live (TTL) or serial numbers define whether and in which periods zone information needs to be synchronized between multiple name servers in order to keep the DNS tree consistent in the distributed DNS database.

A zone is a well-defined point of delegation in the DNS tree and contains contiguous parts of that tree for which a name server manages the respective information. If the CloudGen Firewall holds the primary copy of the zone data (primary zone), it operates as a primary server. The following image shows the record for a primary zone with two subordinated resource records on the CloudGen Firewall:

If the CloudGen Firewall also holds information about which IP address maps to which Internet hostname, this is a reverse zone. If a reverse zone is configured, feeding the DNS server with an IP address in the query (reverse lookup) returns the associated hostname of a specific host within the respective domain:

For converting, use a time-stamp converter, e.g., https://www.unixtimestamp.com/.

The usage of the Serial Number Offset might become clearer in the following example:

If you want to run your Barracuda CloudGen Firewall as a DNS primary server with non-Barracuda DNS secondary servers, you must set the serial number offset so that it is always higher than the serial of a secondary DNS serial at the moment when you click Send Changes / Activate. Therefore, it is recommended to increase the difference by adding enough seconds to the serial number offset. This must only be done when doing a zone transfer for the first time.

When a primary zone is created, the CloudGen Firewall offers the option to automatically create the corresponding first two entries that are essential for setting up a base configuration. If this option is selected, two DNS records will be created automatically for the configured zone:

For some DNS records, the configuration window offers the option to automatically create reverse entries within the corresponding reverse zone.

Processing of Hostnames within Zones

For the new DNS implementation, Barracuda has focused on an optimal compromise to address a correct handling of DNS-specific configuration data and a high level of usability.

The DNS service listens to incoming requests on all configured service IP addresses and handles them with the same priority. Sometimes, however, it is advantageous to respond to resolving requests from a LAN differently than from a WAN. When creating an explicit DNS Listener, you must assign either the tag INTERNAL or EXTERNAL to a special DNS service IP address. Such a listener is identified by its Listener Name and can later be selected by one of the following tags:

The following figure shows a network setup with multiple IP addresses connected both to the WAN and the LAN. The subsequent table shows how the DNS listener considers special service IP addresses depending on the classification and Listener Name.

It is recommended to configure listeners prior to zones because they will be required during the configuration of DNS records within the zone.

Note that this option is BIND-specific and therefore cannot be disabled when the firewall is configured to operate in recursive mode!

By default, the DNS service is listening to requests on all configured DNS service IP addresses. However, recursive DNS lookups are only answered for requests originating from a network that is directly configured on a local interface. DNS requests from a remote network (reachable only via a gateway) are not answered by default.

In case you want to permit answering requests from a remote network, you must configure an explicit listener for that network and allow recursive lookups:

For more information, see How to Configure a DNS Listener.

By default, probing is done every 30 seconds. If the target is reachable, the next probing is done in 30 seconds. If a probing fails, two subsequent probes will follow within the period of a few seconds. If the second probing in sequence (which effectively is the third probing within 30 seconds) also fails, the associated IP address will be removed from the list of valid IP addresses and will therefore not be sent in the response of valid IP addresses for the last resolving query. Probing will be continued in the period of 30 seconds until the target is available again. From this time on, probing will start over according to this pattern. 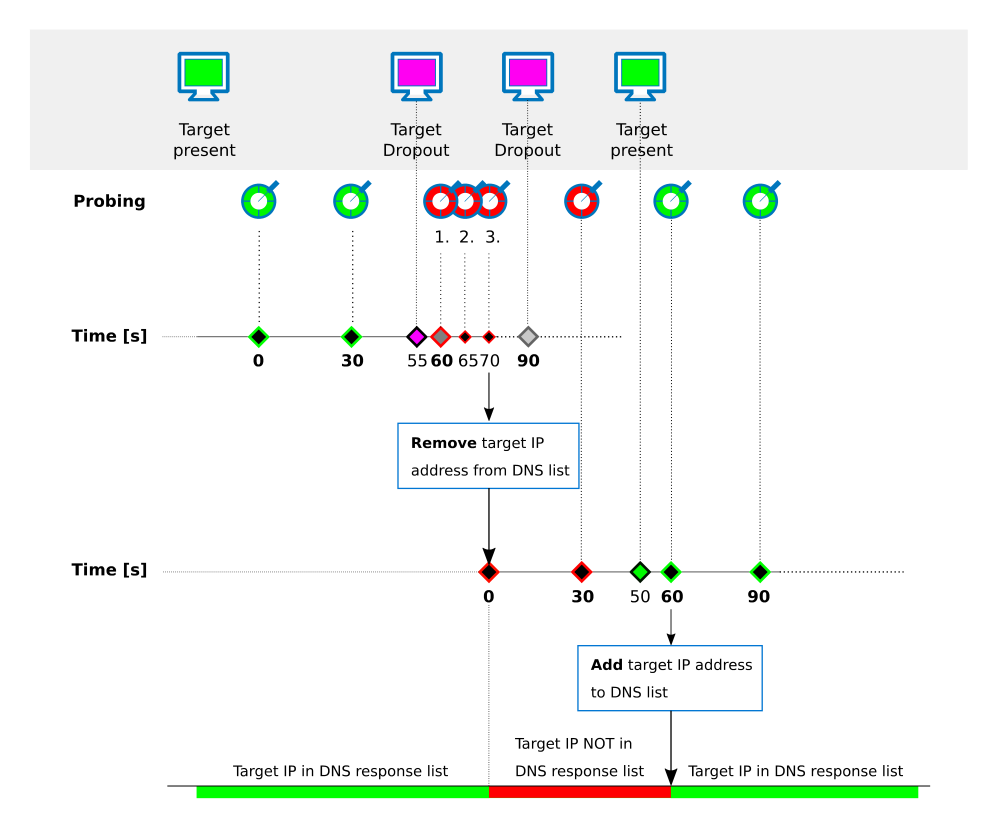 This cyclic rotation will cause the querying clients to contact another target each time after a resolution, thus distributing requests between multiple targets. When attaching a health probe to a set of configured IP addresses, failover scenarios can be handled in case a configured host becomes unavailable.

For more information, see How to Configure Simple DNS Load Balancing with Failover .

DNS Interception allows redirection or blocking of DNS queries for specific domains. This is achieved by applying policies. When creating a policy, you can also specify whitelisting for certain domains.

For more information, see How to Configure DNS Interception .