Partitioning is never static. For example, if all available traffic has a low priority, it is assigned the whole bandwidth available on the sub-interface. The Weighted Random Early Drop (WRED) queue management algorithm is used for prioritization.

To specify the bandwidth ratio of the traffic being propagated by a virtual node, you can select three priorities: class1, class2, and class3. For high priority traffic that should not be restricted to a bandwidth limit, you can assign the NoDelay priority. The NoDelay priority should only be used in well-defined circumstances to avoid crowding out the other traffic. 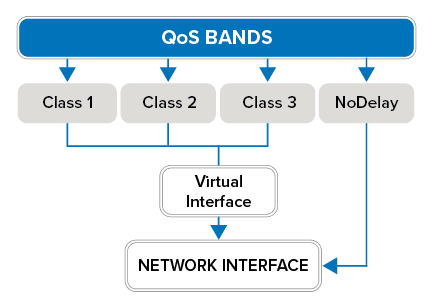 QoS bands prioritize traffic flow in the shaping tree (together with the virtual interface). The connection between the traffic shaping engine and the firewall is done by the shaping connectors. There are eight connectors available for out-of-the-box traffic management: Interactive,  VoIP, Business, Internet, Background, LowPrio, LowestPrio, and Choke.

In order to use a shaping connector, you must refer to it in an access rule. In the rule configuration, you can select between forward and reverse :

For each traffic type, shaping may be configured differently. For instructions on how to create a QoS band and apply traffic shaping to a access rule, see How to Create and Apply QoS Bands .

It is also the TCP flow control mechanism that makes the priority weights approximate values. For example, there are 20 TCP sessions that are all trying to receive the maximum bandwidth possible—where 10 are classified as high and 10 are classified as medium priority. If you configure a ratio of 1:2 for the two priorities, you will observe this ratio when measuring the output for the two priorities. But if you change the setup to 1 high priority TCP session and 39 medium TCP sessions, the results change. The single TCP session gets less bandwidth than expected because the flow control of the 39 TCP sessions generates more traffic while trying to find an optimum rate than the single high priority session. So to favor a small number of TCP sessions over a large number of unprivileged TCP sessions, you should anticipate a larger ratio in order to get the desired output ratio.