After completing these steps, it is safe to install update 8.0.5.

Version 8.0.5 is generally a maintenance release.

For customers running firmware 8.0.4, two new features have been added. See the section What's new in version 8.0.5 below.

The section for Improvements Included in Version 8.0.5 applies to all.

With firmware version 8.0.5, you have the option to migrate the former 3-layer server-service architecture to the new 2-layer Assigned Services architecture. While this is optional in all 8.0.x releases, it will be mandatory in the next upcoming major release.

To achieve higher protection for your data on your firewall, it is possible to encrypt the hard disk. For this, it is necessary to set a parameter in the corresponding configuration window of NGInstall and then re-install your firewall from scratch.

For more information, see How to Deploy a CloudGen Firewall Vx using Firewall Install on a VMware Hypervisor.

To download the newest version of NGInstall that includes the updates, go to https://dlportal.barracudanetworks.com/#/packages/5238/NGInstall_8.0.5-10.exe.

FIPS 140-2 revalidation for the Barracuda KTINA FIPS Crypto Module is in progress with firmware version 8.0.5.

Along with the Barracuda Cryptographic Software Module, the VPN server will be FIPS 140-2 compliant again.

For more information, see DNS. Also, see the paragraph DNS in the section Improvements Included in Version 8.0.5 further below. 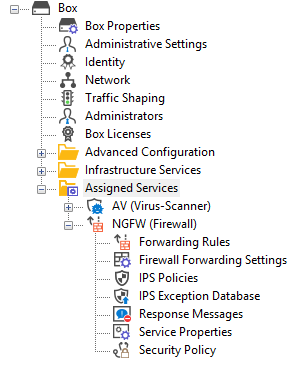 In the past, the configuration of Control Centers operating in a parent-to-child relation required modifying the host firewall ruleset of the firewall. As of release 8.0.5, this is no longer necessary. Firmware release 8.0.5 now covers all necessary steps that require the user to perform a minimum of configuration steps to set up split Control Centers without having to modify the host firewall ruleset.

In case you are already running split Control Centers, some steps must be performed before upgrading to firmware 8.0.5.

For more information, see 8.0.5 Migration Notes and its subordinated migration articles that relate to you running firmware versions, paragraph Important Notes Before Migrating.