Some of the functionality described in this article – Creating an Incident from User-Reported Emails – is available only with Barracuda Email Protection Premium and Premium Plus plans. To upgrade to one of these plans, contact your Barracuda Networks Sales Representative.

You can view and create incidents based on emails that users report as suspicious. Be sure to read to the end of the article to learn about the ways that users can report the emails.

To view the User-Reported Emails page:

This chart shows the five users in your organization who report the most emails as suspicious. You can use this chart to see their reporting records. At a glance, you can review whether the emails they are reporting actually require remediation. If there are fewer than five users in your organization who have reported emails, the chart shows all users who have reported suspicious emails.

Each bar of the chart can contain multiple segments. Hover over each segment to see the exact number of emails it contains.

Viewing an Incident from User-Reported Emails

To view an Incident from User-Reported Emails:

Creating an Incident from User-Reported Emails

This functionality is available only with Barracuda Email Protection Premium and Premium Plus plans. To upgrade to one of these plans, contact your Barracuda Networks Sales Representative.

When viewing incidents from User-Reported Emails, as described above, in Step 3, you can also choose to create an incident based on a user-reported email.

Click Create Incident for that email. Follow the incident creation wizard steps as described in Creating an Incident. The relevant information from the email you selected is automatically entered into the search screen of the wizard.

You can configure the system to automatically send alerts to the security team when a user reports a suspicious email.

To create automatic alerts when a user reports a suspicious email:

From the Barracuda Outlook Add-In

Within the Barracuda Outlook Add-In, users can report suspicious emails, as shown below. This allows end users to be active participants in reporting phishing and spear-phishing emails. These reports go to Barracuda Central and Incident Response. Administrators of Incident Response can investigate these end-user reported emails, create incidents, and take corrective action. 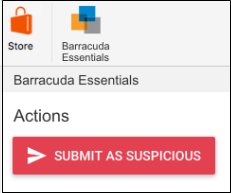 Note that you must activate Email Gateway Defense to use this functionality.

Administrators reviewing message logs within Email Gateway Defense might notice that there is suspicious email. Messages marked as Incorrectly Delivered are reported both to Barracuda Central and to Incident Response where they can be investigated.

To report email as incorrectly delivered, select a message in the Message Log and click Report as Incorrectly Delivered above the message preview.

For more information, refer to Understanding the Message Log in the Email Gateway Defense documentation.