Router Advertisement (RA) is a feature of the IPv6 Neighbor Discovery Protocol (NDP), which replaces the IPv4 Address Resolution protocol (ARP). RA helps network nodes determine information about their LAN, such as the network prefix list, the default routers list, the default gateway, and other information that can help them communicate. It can, for example, lead a node to utilize the emitting router as its default gateway. RA is sent out by routers periodically using ICMPv6 type-134 messages. Part of any RA message is an expiration time value. Entries created by RA messages within network nodes are deleted after expiration, so only routers persist in the lists that are actively broadcasting their presence by sending RA messages. An RA emission can also be forced by sending a Router Solicitation Message to the network's router multicast address to avoid waiting for an entry's expiry, which can, for example, help to quickly activate new interfaces.

Refer to the following list for the structure of an RA prefix data set:

Valid RA options are the sender's link layer address, the router's MTU, and all valid prefixes. All unknown options are ignored according to the RFC.

Given the purpose and capabilities of RA, harmful RA messages can become a security treat to a network node, to a LAN, or at least to performance and bandwidth. Barracuda Network Access Client offers various configuration options to effectively prevent such threats as:

Note that there is a broad range of threats besides these given above.

The IPv6 Router Advertisement Guard tracks all RA messages by reading the following data from an RA packet:

The RA Guard starts to act as soon as a specific network prefix is detected for the second time. The first time a prefix is detected, it is always allowed to pass. It is thereby ensured that, also with a fully configured RA Guard with company prefixes, it is possible to establish a connection to an available network, e.g., in a hotel.

The detected RA data is stored in a list and compared to prefixes configured in the Firewall ruleset. Known router prefixes will be ignored, as illustrated in the figure below.

Now, if the IPv6 Router Advertisement Guard detects an RA message with a still unknown network prefix, it will become active on those firewall rules having the IPv6 Company Prefix Match check box activated. The advertised router with the unknown prefix will be blocked. The following figure illustrates this:

The other one is an inbound rule also named Core Network - Router Advertisement Guard. It blocks all inbound RA messages by default:

There are different possible configuration modes for the IPv6 Router Advertisement Guard. 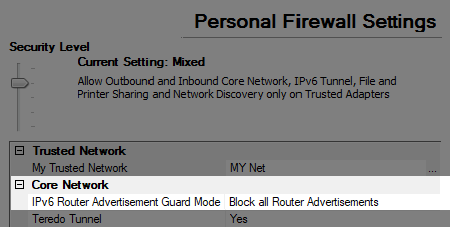 Rules that the IPv6 Router Advertisement Guard is active in are marked with a corresponding symbol within the ruleset overview, as can be seen in the ALL rule in the following illustration:

As soon as the IPv6 Router Advertisement Guard is active, a corresponding text is displayed within the firewall’s Summary overview, either displaying that the guard is only active or in Block all mode. Furthermore, by clicking Alt key > View > Route Advertise List, information about all received routes and a list of the allowed MAC addresses can be displayed.

Connections blocked by the IPv6 Router Advertisement Guard are logged by generating a corresponding entry within the Info column in the Firewall History.