You can define the scaling polices for your instances and set the minimum and maximum number of instances to be used on demand. Auto Scaling can be used for applications that have stable demand as well as for applications that experience hourly, daily, or weekly variability in usage. For more information on AWS Auto Scaling, refer to the AWS article.

A CloudFormation Template (CFT) is a declaration of the Amazon Web Services resources that creates a stack. The Barracuda CloudFormation Template will deploy the Barracuda CloudGen WAF for AWS with the basic service configuration and set up the necessary AWS services (Auto Scale Groups and Launch Configurations, CloudWatch Alarms, SNS Email Notifications, IAM Roles and S3 Buckets) for successful Auto Scaling and bootstrapping.

The Barracuda CloudGen WAF for AWS provides the CFT for:

To successfully launch and use the metered AMI, the account being used to launch the instance must have the ability to use the “AWSMarketplaceMeteringFullAccess” IAM role with “Allow All” permissions. If these permissions are not available, the instance will not be launched successfully.

The CFT deploys the Barracuda CloudGen WAF for AWS into a pre-existing VPC deployment to secure the servers. A typical deployment would look like this: 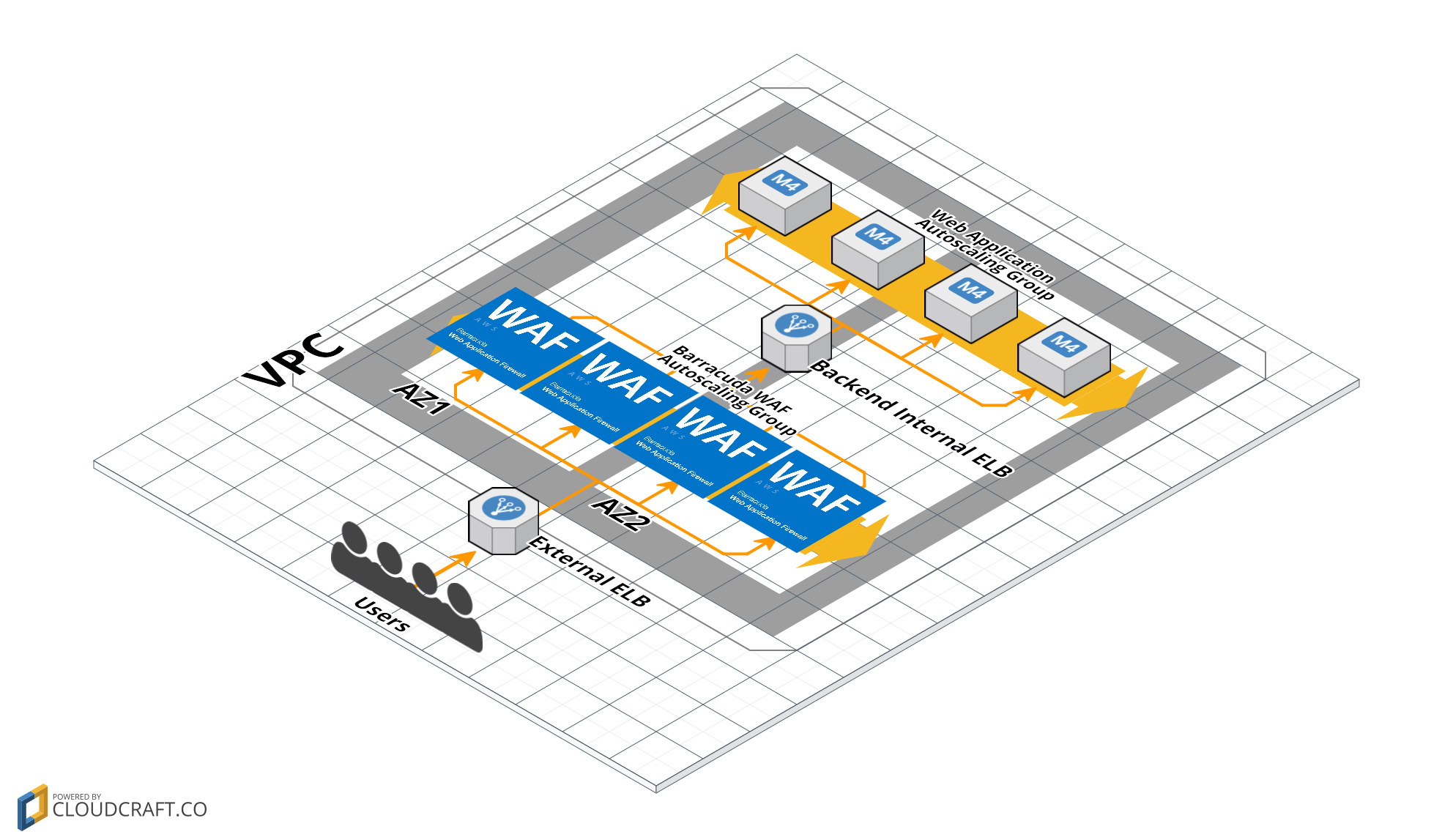 The following are the AWS services required for the auto scaling setup:

Following are the best practices that should be considered to have an optimal deployment:

It is ideal to run the CloudFormation Template (CFT) with the Minimum Instances set to one (1), as clustering may not work as designed if two instances boot up at the same time.  This issue will be fixed in a later release. You can add more instances by modifying the Auto scaling configuration on the AWS EC2 console.  Auto Scaling groups are available in the Amazon EC2 Management Console.

The CloudFormation Template includes predefined alarms that are triggered based on the set metrics. These alarms may scale up new instances, or scale down older instances based on the alarm configuration. It is recommended that you deploy a test setup, perform the auto scaling test, and modify the alarms as per your requirement. For instance, there may be cases where you want the instances to scale up later, or scale down earlier based on your testing. In such cases, you can either modify the CFT before uploading it, or modify the alarm in the Amazon CloudWatch Management Console after deploying the CFT.

The Barracuda CloudFormation Template includes alarms that are based on the following principles for optimal usage:

Continue with the How Barracuda CloudFormation Template Works in PAYG/Hourly Instance article.